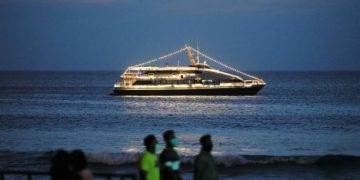 Lankan navy displays an array of warships on its 70 th. Anniversary

Lankan navy displays an array of warships on its 70 th. Anniversary Colombo, December 14 (www.navy.lk): Even if there is no visible enemy at present, the Sri Lanka Navy, which is the island nation’s  First Line of Defense, is geared to curb wide-ranging nefarious acts such as piracy, maritime terrorism, drug trafficking, arms smuggling, human trafficking, illegal unreported and unregulated fishing, and marine pollution.

The sea-going arm of the nation conducts regular day and night patrols at maritime boundaries to protect the island’s territorial frontiers, utilizing the Navy’s resources and manpower with maximum productivity and efficiency.

As part of its 70 th. Anniversary, the Lankan navy displayed its might by parading some of its ships off the Galle Face promenade in Colombo from December 9 to 13.

Evening and morning walkers and many others who came to Galle Face to take in the sea breeze were able to see a wide array of warships from the Offshore Petrol Vessel to the Dvora gunboat.