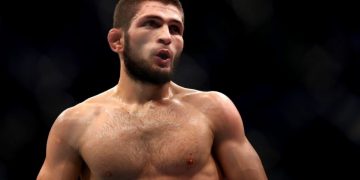 Sport Bible (October 25) – Khabib beat the interim champion after one minute and 34 seconds of the second round, after getting Gaethje to the ground for the second time in the fight, to take his record to 29-0.

The first round started tentatively with both men trying to size the other up, and Gaethje making it tough for Khabib by keeping his feet moving and landing a couple of early leg kicks.

Nurmagomedov landed the first significant strike but his opponent landed one back. Khabib upped the pressure as the round went on and the Highlight was on the back foot for much of the opening four minutes, before he landed two shots of his own going into the final minute of the round.

The Eagle ended the round with a takedown in the final minute and he tried to get the challenger in a submission hold, but the American held on to the hooter.

Gaethje landed a couple of excellent leg kicks early in the second half but Nurmagomedov scored a takedown off the second one.

The champ, who had 10 submission finishes in his MMA career going into the fight, ended it quickly from there and forced his opponent to tap out from a triangle choke.

As well as his title, Khabib’s unbeaten record was on the line, having won his 28th fight in-a-row last September, by beating Dustin Poirier.

Gaethje won the interim belt earlier this year at UFC 249 by beating Tony Ferguson, having replaced Khabib in the fight.

On Friday there had been a worry about the Russian over the weigh in. The 32-year-old was clearly relieved to have made weight, and some even questioned if he actually had.

It was revealed that he had lost 19 pounds, over a stone, in the previous six days leading up to the fight, so it was no wonder he was relieved.

It was an emotional night for the Russian who lost his father, who was his trainer, to Covid-19 earlier in the year and he broke down in tears at the end of the fight.

Following the victory, Khabib announced that the win over Gaethje was his final night in the octagon and he announced his retirement in his post-fight interview.