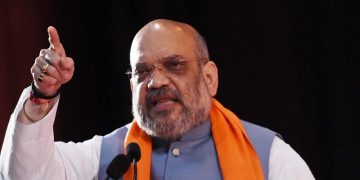 Washington/New Delhi, December 10 (newsin.asia): The U.S. Commission on International Religious Freedom (USCIRF) has raised “serious concerns” and eyes selective sanctions over the controversial Indian Citizenship (Amendment) Bill, which was by the Lower House of the Indian parliament.

A statement from USCIRF says that it “deeply troubled by the passage of the Citizenship (Amendment) Bill (CAB), originally introduced by Home Minister Amit Shah, in the Lok Sabha (the lower house of the Indian Parliament) given the religion criterion in the bill.“

The CAB will now move to the Rajya Sabha (Indian Parliament’s Upper House).
Sanctions Against Shah and Others

The statement goes on to state that: “If the CAB passes in both houses of parliament, the United States government should consider sanctions against the Home Minister and other principal leadership,” the USCIRF says.

“The CAB enshrines a pathway to citizenship for immigrants that specifically excludes Muslims, setting a legal criterion for citizenship based on religion.”

“The CAB is a dangerous turn in the wrong direction; it runs counter to India’s rich history of secular pluralism and the Indian Constitution, which guarantees equality before the law regardless of faith.”

“In conjunction with the ongoing National Register of Citizens (NRC) process in Assam and nationwide NRC that the Home Minister seeks to propose, USCIRF fears that the Indian government is creating a religious test for Indian citizenship that would strip citizenship from millions of Muslims.”

The Lok Sabha first passed the CAB in January 2019, but due to protests, the government withdrew it before it could be voted on by the Rajya Sabha. Both houses of parliament must ratify a bill before it can become law.”
“The BJP included the passage of the CAB as part of its manifesto released ahead of its overwhelming electoral victory in May 2019.

The U.S. Commission on International Religious Freedom (USCIRF) is an independent, bipartisan federal government entity established by the U.S. Congress to monitor, analyze and report on threats to religious freedom abroad. USCIRF makes foreign policy recommendations to the President, the Secretary of State and Congress intended to deter religious persecution and promote freedom of religion and belief.
Unwarranted Says India

Govt of India Rejects US Charge

Responding to the USCIRF’s statement, Indian External Affairs Ministry spokesman Raveesh Kumar said: “We regret the inaccurate and unwarranted comments made by USCIRF on #CAB. They have chosen to be guided by their prejudices and biases on a matter on which they have little knowledge and no locus standi.”
In a tweet, Kumar attached a statement by the ministry which said USCIRF’s statement was “neither accurate nor warranted”.

“The Bill provides expedited consideration for Indian citizenship to persecuted religious minorities already in India from certain contiguous countries. It seeks to address their current difficulties and meet their basic human rights.

“Such an initiative should be welcomed, not criticised by who are genuinely committed to religious freedom,” the statement read.

It added that the CAB does not affect the “existing avenues available to all communities interested in seeking citizenship from doing so”.

The statement, attributed to Kumar, claimed the “recent record of granting such citizenship would bear out the Government of India’s objectivity in that regard”.

“Neither the CAB nor the National Register of Citizens (NRC) process seeks to strip citizenship from any Indian citizen of any faith. Suggestions to that effect are motivated and unjustified.”

He said every nation, including the US, has the right to “enumerate and validate its citizenry” and to “exercise this prerogative through various policies”.

Kumar added that USCIRF’s position was “not surprising given its past record”.

“It is, however, regrettable that the body has chosen to be guided only by its prejudices and biases on a matter on which it clearly has little knowledge and no locus standi.”

“We strongly condemn Indian Lok Sabha citizenship legislation which violates all norms of int human rights law & bilateral agreements with Pak. It is part of the RSS “Hindu Rashtra” design of expansionism propagated by the fascist Modi Govt,” Imran said in a tweet.

Meanwhile, in a statement issued by the Foreign Office, Pakistan condemned the move and said it was in “complete violation of the Universal Declaration of Human Rights and other international covenants on elimination of all forms of discrimination based on religion or belief”.

“The latest legislation is another major step towards the realisation of the concept of ‘Hindu Rashtra’, idealised and relentlessly pursued by the right-wing Hindu leaders for several decades. It is driven by a toxic mix of an extremist ‘Hindutva’ ideology and hegemonic ambitions in the region.

“It is also a clear manifestation of interference in the internal matters of neighbouring countries based on religion, which we reject completely,” added the statement.