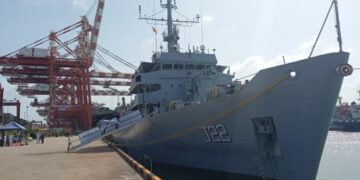 Colombo, June 25 (newsin.asia): On the auspicious of Poson Poya, 24 June 2021, which marks the arrival of Buddhism in Sri Lanka from India, another glorious chapter in the millennia-old friendly and close ties between the two neighbors was added with the arrival in Colombo of INS Sarvekshak, a Survey Ship of the Indian Navy.

The ship, equipped with the state of the art survey equipment including the Side Scan Sonar, would assist in the survey being undertaken in the vicinity of the ill-fated MV X-Press Pearl and off Colombo.

INS Sarvekshak was deployed upon a formal request from the Government of Sri Lankan to ensure the safety of navigation in the area outside the Colombo harbor.

The joint survey operations would have the coordinated participation of the National Aquatic Resources Research and Development Agency (NARA), the Sri Lanka Navy and the Indian Navy.

A coordination meeting was conducted on 25 June 2021 to discuss furthers plans for the survey. The meeting was attended by Prof. A Navaratneraja, Chairman NARA, Dr. H.M.P. Kithsiri, Director General NARA, Captain Vikas Sood, Defence Adviser at the High Commission of India in Sri Lanka and Capt Wijesooriya from the Sri Lanka Navy.

MV X-Press Pearl which caught fire on 20 May 2021 was reportedly carrying 1,486 containers out of which large numbers fell into the sea before the fire was doused after an extensive India-Sri Lanka joint operation as part of Operation Sagar Aaraksha 2.

Many institutions like the UN, UNEP as well as officials from the Government of Sri Lanka have assessed that the containers that fell off the ship pose a grave concern to the livelihood of the fisher community living along the western coast of Sri Lanka as also to the safety of marine traffic operating through Colombo port.

In continuation of Operation Sagar Aaraksha 2, the joint Survey Operations would assist in restoring safe navigation in the area and complement India’s ‘Neighborhood First’ policy that calls for, amongst other things, swift support in mitigating such calamities in the Indian Ocean Region.