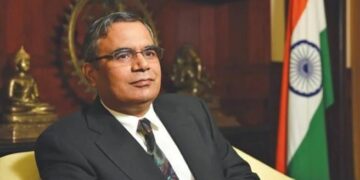 Colombo, February 26: India has told the UNHRC’s on-going 46 th.session in Geneva that the full implementation of the 13 th. Amendment of the Sri Lankan constitution, which provides for devolution of power to the provinces, is the way to bring about ethnic reconciliation in the country.

The Indian Ambassador to the UN in Geneva, Indra Mani Pandey told the council that India’s policy towards Sri Lanka rests on two pillars: i). Support for Sri Lanka’s unity and territorial integrity. ii). An abiding commitment to aspirations of the Tamils of Sri Lanka for equality, justice, peace and dignity. But these are not either-or choices, he added.

“We believe that respecting the rights of the Tamil community, including through meaningful devolution, contributes directly to the unity and integrity of Sri Lanka,” Pandey said.

“While advocating that delivering on the legitimate aspirations of the Tamil community is in the best interests of Sri Lanka, India calls upon Sri Lanka to take necessary steps for addressing such aspirations, including through the process of reconciliation and full implementation of the 13th Amendment to the Constitution of Sri Lanka.”

Ambassador Pandey, who is the Permanent Representative of India, said Indian believes that respecting the rights of the Tamil community, including through meaningful devolution, contributes directly to the unity and integrity of Sri Lanka.

“We have taken note of the High Commissioner’s report on Sri Lanka and her oral remarks. The Council has adopted 7 Resolutions on the question of human rights in Sri Lanka since May 2009, when the three decades old conflict in that country ended.”

“The assessment of the High Commissioner regarding developments nearly 12 years from the end of the conflict raises important concerns. The Sri Lankan Government has articulated its position on these issues as well. In evaluation of both of these, we should be guided by a commitment to find a lasting and effective solution for this issue,” Pandey said.

India voted in support of the UNHRC resolutions on SL in 2012 and 2013, and abstained from voting in 2014 when it opposed the decision of the council to set up an OHCHR-led investigation into war-time abuses in the island.

The representative of Pakistan  urged the Sri Lankan Government to make good “early” on its commitment to allow funeral rights to all religious minorities during the COVID-19 pandemic, but urged the Council to pursue genuine dialogue with SL’s democratically-elected Government in order to promote justice and reconciliation in the island.

The Council should consider SL’s strong democratic traditions, impressive socio-economic record and multi-ethnic composition of the parliament and the cabinet of ministers. “The High Commissioner’s Report and the Council’s deliberations should acknowledge these positive aggregates,” the representative for Pakistan noted.

US Seeks Mandates To Pursue Accountability

United States has urged Sri Lanka to make public a strategy and timetable for the implementation of recommendations in the report compiled by UN High Commissioner for Human Rights Michelle Bachelet.

Daniel Kronenfeld of the US mission in Geneva informed the UN Human Rights Council that the United States shares the concerns of Office of the United Nations High Commissioner for Human Rights (OHCHR) on Sri Lanka.

“We thank High Commissioner Bachelet for her comprehensive report and note the Government of Sri Lanka’s engagement.”

Kronenfeld stressed that the US is concerned by accounts of increasing marginalization of minority communities and shrinking space for civil society, including independent media.

“We remain concerned about the lack of accountability, including high-level appointments of military officials credibly accused of conflict-era abuses,” he went on to say.

The US envoy insisted that Sri Lankan government’s efforts to address concerns raised in OHCHR’s report via a domestic process need to be meaningful and credible. “We note that the Sri Lankan Commission of Inquiry does not include a mandate to pursue accountability, and that the Office of Missing Persons and Office of Reparations need to operate without political interference.”

“We note that respect for the human rights of all Sri Lankans is critical to Sri Lanka’s long-term peace, security and prosperity, and call on the Sri Lankan government to take meaningful, concrete steps to promote accountability, justice, and reconciliation,” he remarked.

The entire Western bloc of member states expressed support for Bachelet’s report to the Council and voiced grave concerns about the human rights situation in Sri Lanka.

The Government of Canada during its intervention, asked how member states could support the OHCHR to gather and preserve evidence for future trials. Germany expressed its support to pursue judicial proceedings against Sri Lankan perpetrators of grave crimes, saying a case was already underway in Germany against a former LTTE member.

The Representative for France asked how the Human Rights Council will continue its work with SL if the government breaks off dialogue with the Council altogether. Switzerland noted that domestic processes for accountability had not worked in SL and said the country was still denying the past. The Representative for Switzerland also asked the High Commissioner to explain how a dedicated evidence gathering mechanism would be designed.

Just days after Malawi announced it was joining the core group sponsoring the resolution on Sri Lanka at the Council, the Government of Gabon also took cognisance of the High Commissioner’s report on SL, saying that committing violations of human rights could undermine the progress made. The interventions by two key members of the African bloc, signals that the Government cannot take the support of African nations at the Council for granted when it tallies its support for a vote on the resolution.

The Chinese Permanent Representative in Geneva Ambassador Chen Xu extended China’s support to Sri Lanka in his official statement in the Interactive Dialogue on the OHCHR Report on Sri Lanka.

“It’s the consistent stand of China to oppose politicization and double standards on human rights, as well as using human rights as an excuse in interfering in other countries’ internal affairs. We are concerned about the clear lack of impartiality shown in the OHCHR’s report to this session on Sri Lanka and express our regret over the failure of the OHCHR to use the authoritative information provided by the Sri Lankan government.”

“The so-called “preventive intervention” and the proposed targeted sanctions contained in the OHCHR’s report are clear interference in the internal affairs of Sri Lanka and exceed the mandate of the OHCHR. We hope that the HRC and the OHCHR will strictly follow impartiality, objectivity, non-selectivity and non-politicization principles, respect the sovereignty and political independence of all nations, respect the efforts of the nations for the protection and promotion of human rights, advocate constructive dialogue and cooperation, and abandon the practice of interfering in the internal affairs of other countries and exerting political pressure.”

“Prior to the opening of the 46th Session of UNHRC, President Gotabaya Rajapaksa wrote a letter to Chinese President Xi Jinping requesting China’s understanding and assistance on the resolution. On 24th February, Foreign Minister Dinesh Gunawardena also made a telephone call to Chinese State Councilor and Foreign Minister Wang Yi to seek the continued solidarity and support. Wang Yi reiterated that China is willing to unswervingly support each other with Sri Lanka to jointly safeguard the legitimate rights and interests of developing countries, the basic norms governing international relations, and the purposes and principles of the UN Charter including non-interference in other countries’ internal affairs.”

During the discussion, speakers welcomed the detailed report, and its focus on the issue of accountability for past violations, as well as the current human rights situation. The militarisation of the current government and its impact on the Tamil and Muslim communities was a cause for concern. Speakers asked the High Commissioner about the ways that victims could be involved in the accountability process. The forced cremation of COVID-19 victims had to stop. Sri Lanka’s withdrawal from resolution 40/1 and its lack of support for the comprehensive Human Rights Council process was regrettable. The shrinking space for civil society in Sri Lanka was of particular concern. Sri Lanka was urged to review the Prevention of Terrorism Act, the Office of the High Commissioner for Human Rights (OHCHR) said.

Other speakers welcomed Sri Lanka’s efforts to improve the human rights situation and its openness in discussing its issues. The report lacked contextual analysis, did not take into account the effects of the COVID-19 pandemic and Sri Lanka’s comments, and mischaracterised Sri Lanka’s long history of fighting terrorism, as well as its successful cooperation with the Universal Periodic Review. Speakers expressed regret over the recent demolition of the Tamil monument at Jaffna University, noting that domestic human rights measures were not credible given the past history of backsliding. Nearly a decade of Council engagement had not led to accountability for past war crimes, as alleged perpetrators had been appointed to senior government positions, facilitating further abuses.

Nada Al-Nashif, Deputy High Commissioner for Human Rights, in her concluding remarks, noted that the Office of the High Commissioner enjoyed a very frank and open relationship with the Government of Sri Lanka. Victims had a central place in the design of accountability mechanisms, and the Office provided support in this regard. Legislative reforms must comply with international obligations.