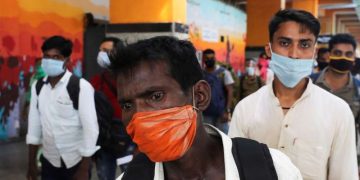 India has registered 55,342 new coronavirus cases in the past 24 hours, its lowest single-day tally since the middle of August. October 13 (Al Jazeera) – India has registered 55,342 new coronavirus cases in the past 24 hours, its lowest single-day tally since the middle of August.

The health ministry on Tuesday raised India’s confirmed total to more than 7.18 million cases but said the country was showing a trend of declining daily cases over the last five weeks.

According to the ministry’s data, the average number of daily cases between September 9 and 15 was 92,830.

That average has steadily declined since, falling to less than 73,000 per day over the last week.

Meanwhile, India’s testing rate has remained constant, with more than a million tests being carried out every day.

But experts say the true number of infections may be much higher, as testing rates in the vast country – home to some of the world’s most crowded cities – are much lower than many other countries.

India, home to nearly 1.4 billion people, is second in the world in total COVID-19 cases, behind only the United States, which is approaching the 8 million mark.

India imposed one of the region’s strictest nationwide lockdowns in March, forcing people to stay home and shut businesses, and triggering an exodus of millions of migrant workers.

In June, the country started a phased reopening of economic activities.

Beginning Thursday, cinemas will reopen at 50-percent capacity while the federal government has left the decision of whether to reopen schools and other public places to the state governments.

Experts, however, fear the upcoming festival season – when large crowds gather for public celebrations – could exacerbate the situation.

Anticipating a new surge in cases, the government has issued strict guidelines and capped the number of revellers for the two main Hindu festivals of Dussehra on October 25 and Diwali early next month.