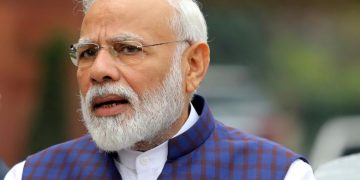 by Editor
in Around South Asia, Around The World, India, World
Reading Time: 2 mins read
1 0 Indian lawmakers returned to the nation's Parliament for the first time since the start of the pandemic.PHOTO: REUTERS

New Delhi, September 14 (Bloomberg) – Indian lawmakers returned to the nation’s Parliament for the first time since the start of the pandemic with Prime Minister Narendra Modi’s government bracing for a tumultuous session as the country sets new global records in coronavirus infections, and with a tense border standoff with China dominating the headlines.

The worst economic slowdown amid major economies is also expected to drive debate, although the question hour – in which lawmakers seek direct replies from ministers – has been suspended in a move that’s only happened in times of war or national emergency, prompting criticism from the opposition.

Countries around the world have been grappling with how to conduct legislative business during the pandemic.

In India, this Parliament session will be marked by several firsts.

The Covid-19 epidemic has forced the overhaul of logistics and infrastructure to maintain social distancing among members.

Members are required to get tested for the virus no more than 72 hours before the start of the Parliament session, according to a bulletin from the upper house or Rajya Sabha.

Some senior lawmakers have informed the secretariat of both houses they will skip the session to avoid exposing themselves to possible infection.

The average age of members of 545-seat lower house or Lok Sabha is 54 and that of the 250-member upper house is 63 years – putting many in the high-risk group for serious complications from Covid-19.

Ultraviolet germicidal irradiation in the air conditioning system will be used, while polycarbonate sheets will separate galleries from chambers, additional display screens and special cables connecting the two houses have been installed.

The session comes as Modi struggles to contain the spread of the virus, which is growing at one of the fastest paces in world and adding as many as 95,000 case each day.

India is now the second worst affected country with more than 4.7 million infections and has the highest death toll after US and Brazil.

India’s strict lockdown, implemented in late March to contain the outbreak, led to the biggest contraction among major economies with gross domestic product shrinking 23.9 per cent in the three months to June from a year earlier, resulting in millions of job losses.

Modi’s administration is also working to de-escalate tensions along the disputed Himalayan border with China, where some 20 soldiers have been killed.

The main opposition Congress party intends to push the government over what it says are its failure to contain the coronavirus epidemic and manage relations with its nuclear-armed neighbour, China.

“We will demand white paper on China’s aggression along the Line of Actual Control, raise the issue of handing of Covid that is ravaging the country and highlight mismanagement of economy that lead to free fall of GDP,” said Adhir Ranjan Chowdhury, leader of Congress party in the lower house of Parliament.

“We will push the government to the corner.” The session, that is scheduled to end on Oct 1, will take up 11 Bills to replace existing ordinances and some other legislation, including three Bills on labour reforms, according to a government statement.