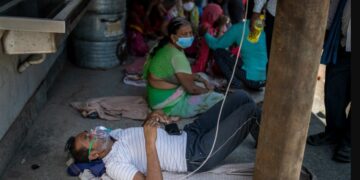 No Result
View All Result
Home Around South Asia Bhutan Colombo, April 28: A video conference of the Foreign Ministers of South Asian countries and China on the containment of the raging COVID-19 pandemic in the region was held on Tuesday. However, India and its allies, Bhutan and the Maldives, were conspicuously absent, perhaps due to the participation of China. New Delhi envisages no role for China in South Asia.

Apparently, the regional and global health emergency has not mitigated pre-existing conflicts and politico-strategic line-up in the strife-torn South Asian region.

A press release from the Sri Lankan Ministry of Foreign Affairs said that the discussions focused on consolidating COVID-19 response cooperation and promoting post-pandemic economic recovery as well as poverty alleviation amidst the recent spike in COVID-19 infections.

Lankan Minister Gunawardena underlined the critical need for active cooperation in effectively responding to COVID-19. He also outlined the importance of addressing the challenges posed by COVID-19 pandemic in a manner that helps countries to take forward national priorities in economic recovery and uplifting rural livelihoods.

Gunawardena reiterated that taking appropriate measures to maintain a steady and equitable flow of critical medical equipment, medicine, and vaccines to nations in need, under the guidance of the UN and WHO, is essential to contain the epidemic and avoid relapses.

The participants expressed the view that effective response should have at its core, a process to address issues on supply of emergency needs during natural and other disasters, the use of technology and other tools and platforms for poverty alleviation in the rural economies.

Both Pakistan and China have officially offered India help.

Pakistan’s Foreign Ministry issued a statement on Saturday saying it had offered to provide items including ventilators and X-ray machines. “The concerned authorities of Pakistan and India can work out modalities for quick delivery of the relief items,” the Ministry said.

The Edhi Foundation, a well-known Pakistan NGO, which is doing in Pakistan what Mother Teresa was doing in Kolkata, had written to the Indian Prime Minister Narendra Modi, offering 50 ambulances with equipment and support staff. But there has been no response or even an acknowledgement from New Delhi.

Meanwhile, Pakistani citizens took to the social media to express sympathy and support for Indians suffering from the human devastation caused by the pandemic. An India-Pakistan social media platform has been built to share commonalities between the people of the two countries with appeals to forget animosities and live in amity.

China appears to be vacillating in its policy towards the crisis in India. The Chinese Foreign Ministry spokesman Wang Wenbin on Monday said Beijing and New Delhi “are communicating with one another” at present. “We stand ready to offer support and assistance to the best of our capability if the Indian side informs us of its specific needs,” he said.

However the situation on the ground was that the Indian private sector had been importing COVID-19 containment medical supplies from China in a big way. But this ground to a halt last week when the largest cargo flight operator from China to India, the Chinese state-owned Sichuan Airlines, suspended its services to India for 15 days because of the surge in Covid-19 cases there.

This has disrupted frantic efforts by Indian private companies to import from China medical supplies including oxygen concentrators to fight the pandemic. The airlines operated 10 flights on six routes to four India cities comprising Delhi, Mumbai, Chennai and Bangalore. The airlines said “…in the face of sudden changes in the epidemic situation (in India), in order to reduce the number of imported cases, it is decided” to suspend the flights.

The ministry also did not confirm or deny a tweet by the Chinese embassy in Sri Lanka, which said 800 oxygen concentrators have been airlifted from Hong Kong to Delhi with another 10,000 to be dispatched in the coming week.

When asked to comment on the tweet, Wang only said: “As I said, China is willing to provide necessary support and help to India in its fight against the virus. If India raises specific demands, we will provide help and support to the best of our capability.”

However, common Chinese in mainland China have written to their friends in India asking how they can help. There is at least one reported case of a Chinese national sending US$ 2007 to an NGO involved in COVID-19 relief work in Mumbai.

US Refuses and Relents

At first, the US refused to send to India raw materials needed to manufacture COVID-19 vaccines, triggering consternation in India. Washington  quoted a law which said that American domestic needs had to be met first before exporting any material to other countries. In response Indians pointed out that India had sent medical supplies to the US when the pandemic was at its peak there.

Subsequently, the White House amended its stand on Sunday saying that it will “immediately” send supplies of the raw materials needed to make vaccines, as well as therapeutics, tests, ventilators and protective equipment to India.

“The United States has identified sources of specific raw material urgently required for Indian manufacture of the Covishield vaccine that will immediately be made available for India,” it said.

US President Joe Biden said on Twitter: “Just as India sent assistance to the United States as our hospitals were strained early in the pandemic, we are determined to help India in its time of need.”

According to Nikkei Asia, the US is now sending a “strike team” of medical experts and supplies to help its partner in Quad with supplies of pledged raw materials for vaccines, diagnostic test kits, ventilators and personal protective equipment.

On Monday, Reuters reported that the U.S. Chamber of Commerce had teamed up with 40 companies to provide assistance to India, including a portal for corporate donations. The head of the chamber warned there is a “real risk” of the Indian economy faltering, with spillover effects.