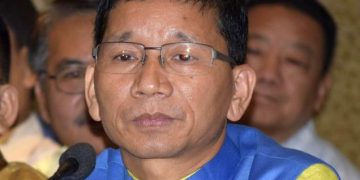 Itanagar August 10 (The Hindu): Kalikho Pul, a former Chief Minister of Arunachal Pradesh, an Indian state bordering Tibet, allegedly committed suicide on Tuesday, less than a month after the Supreme Court unseated him and reinstated his rival Nabam Tuki, as Chief Minister.

Pul’s body was found hanging from a ceiling fan in a bedroom of the Chief Minister’s official bungalow, which he had not vacated.

There were reports of a suicide note being found but the police refused to confirm this. State police chief S. Nithyanandam only said that all documents had been seized from the room where the incident occurred.

As news of his death spread across Itanagar, hundreds of Pul’s supporters gathered outside his residence and staged a protest, blaming Congress party legislators for their “betrayal” of Pul.

While some demanded Chief Minister Pema Khandu’s resignation, others set fire to a coffin that was brought for Pul’s body, claiming it was “not worthy of a popular CM like Pul.”

The mob also vandalised the official residences of Deputy Chief Minister Chowna Mein and Industries Minister Tapang Taloh which are adjacent to the the Chief Minister’s bungalow.

The situation was brought under control by the afternoon. Pul’s body is expected to be flown to his district, Anjaw, on Wednesday.

A senior Congress leader in New Delhi said Pul had became a “victim of the BJP’s vicious politics” after his rebellion in December 2015. “He was an honest, hard-working politician. He got entangled in the BJP’s twisted agenda,” the Congress leader said.

“We must remain calm and pray for his soul during such a time,” Khandu said, adding that a magisterial probe had been ordered into the incident.

Denying allegations that Pul had been served a notice to vacate the bungalow by Tuesday, Khandu said he had told Pul that he could stay in the bungalow “for as long as he wished.”

Protesters who gathered in front of the official residence of the Chief Minister after news of Pul’s death, shouted slogans against Khandu and demanded his resignation.

In 2015, Pul led a year-long rebellion against Nabam  Tuki but his efforts came to naught as the Congress leadership refused to remove Tuki.

Political instability culminated in the imposition of President’s rule on January 26, 2016.

In February, Pul and other Congress rebels formed the government with outside support from the Bharatiya Janata Party (BJP). But in a dramatic turn of events, the Supreme Court on July 13 restored Tuki as the Chief Minister.

Days later, the Congress leadership, in a bid to assuage the party rebels, asked Tuki to step down, paving the way for Khandu to become Chief Minister and the return of Pul and his rebels to the party.

Rise and fall of Kalkho Pul

Pul, who took over the reins of the state on February 19 this year, served as Chief Minister for a brief period till the Supreme Court reinstating Nabam Tuki in July. Tuki then made way for Pema Khandu as the tenth Chief Minister of Arunachal Pradesh.