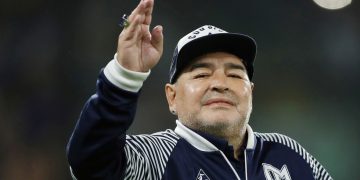 Football icon Diego Maradona has passed away aged 60 after suffering a cardiorespiratory arrest on Wednesday. November 25 (Express) – Football icon Diego Maradona has passed away aged 60 after suffering a cardiorespiratory arrest on Wednesday. Maradona underwent surgery earlier this month to remove a blood clot from his brain.

He was released from the clinic in Buenos Aires two weeks ago.

Maradona is widely recognised as one of the greatest footballers of all time.

His professional career spanned 21 years with his crowning moment coming at the 1986 World Cup as he led Argentina to glory.

Maradona began his career at Argentinos Juniors before moving on to Boca Junior where he was quickly picked up by Barcelona.

Just two seasons were spent at the Nou Camp though before he made the move to his beloved Napoli.

It was in Italy where Maradona was starting tone recognised as one of the greatest of all time.

Maradona also become synonymous with England supporters at the 1986 World Cup for his ‘Hand of God’ goal, which eliminated the Three Lions from the tournament.

His second goal in the game though is widely regarded as one of the greatest ever scored at a World Cup which saw him dribble past five England players and finally Peter Shilton to tap into an empty net.