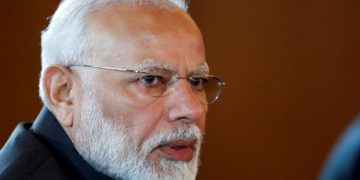 by Editor
in Around South Asia, Around The World, India, World
Reading Time: 3 mins read
2 0 New Delhi, May 20 (TheStraitsTime) – Indian Prime Minister Narendra Modi is now more popular than ever at a time when many other national leaders have come under scrutiny because of the way they handled the Covid-19 pandemic.

Morning Consult, a US-based global data intelligence firm, said the Indian Prime Minister has a net approval rating of 80 per cent on May 4, up from 76 on Jan 7, and his popularity with citizens is the highest among all global leaders.

Another poll by television channel Times Now and ORMAX Media on May 9 found Mr Modi’s popularity grew from 7.1 per cent to 7.9 per cent between April and May 2020.

As Mr Modi moves the country out of lockdown, many Indians have full faith that the 69-year-old politician will successfully steer India out of the coronavirus crisis, which has upended the Indian economy and put public health at risk.

India has recorded over 101,139 Covid-19 cases and 3,156 deaths as the government has continued to loosen restrictions on a stringent lockdown that shut down economic activity.

Most supported Mr Modi’s decision to enforce the lockdown even as it triggered a humanitarian crisis, resulting in hundreds of thousands of daily wage migrants losing their jobs and making a desperate dash by foot for the safety of their homes.

The migrant worker crisis has continued unabated for nearly two months even as the government started bus and train services to ferry migrants, low on food and cash, back to their homes.

“He is brilliant and a master communicator and has clearly been able to impress a vital segment of society, at least the lower middle class, middle class and upper middle class and well to do, through his address to the nation. These polls are talking about this section, who believe what he is asking them to do is what should be done,” said Dr Sandeep Shastri, a political scientist and pro vice-chancellor at Jain University.

“The question that still remains unanswered is, do the poorer sections of society feel that enough has been done for them?”

Since then, religious polarisation has increased with a law giving citizenship to non Muslims in neighbouring countries, sparking protests and triggering communal riots in Delhi.

Even before the pandemic, India’s growth had been slowing, reaching a six-year low of 4.7 per cent in the last quarter of 2019. Moody’s Investors Service has cut forecast for India’s growth for 2020 to 0.2 per cent.

To push recovery, the government unveiled a 20 trillion rupee (S$378 billion) economic package containing a series of measures for different sectors, including three trillion rupees worth of collateral-free loans for small businesses and free food – including 5kg of wheat or rice – for every poor family for two months.

Still, Edelweiss Securities in a note said the package “is underwhelming on ‘here and now’ demand stimulus”.

“The package is very multi dimensional and there are a lot of things they have announced. But in big picture terms, we were hoping for short term measures to boost demand,” said Associate Professor  Amit Basole, who teaches economics at Azim Premji University.

Some analysts have said India should have followed other countries in directly putting cash into people’s hands.

Enforcing the lockdown is seen to be the easy part. Mr Modi will clearly face the toughest challenge to his leadership yet, as he navigates the country out of the crisis. Job are already getting lost, poverty is expected to deepen and businesses are struggling to stay afloat.

Still, BJP spokesman Nalin Kohli said the “economic package” would “take care of immediate as well as long term implications and measures for economic revival” and maintained the migrant debacle was a state issue.

Mr Modi’s dominance is also expected to continue in the absence of any alternative. Opposition leaders, including Congress’ Mr Rahul Gandhi, have so far failed to enthuse people.

“At the moment, there is no leader and no alternative. In the absence of an alternate leader, I would say with the kind of popularity and image Mr Modi has, I don’t think erosion (of popularity) is going to happen overnight, if at all,” said political analyst Nilanjan Mukhopadhyay.