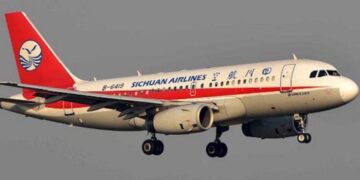 Beijing April 26 (Global Times): A logistics arm under Sichuan Airlines said that it is discussing a new plan to resume cargo services to India, as the country has been going through a COVID-19 resurgence.

The response came after Indian media reported that Sichuan Airlines had suspended all its cargo flights to India for 15 days, and said that such a move brings “major disruption” to private traders’ efforts to buy medical supplies, including oxygen concentrators, from China.

“We are re-evaluating the original plan of suspending cargo services to India, and actively discussing a new plan to guarantee cargo services to the region,” the company said in a reply sent to the Global Times on Monday.

The company said the reason why it suspended cargo flights to India was the recent sudden change in COVID-19 cases in India.

It is reasonable for airlines to suspend services due to the sudden increase of COVID-19 cases in the country, and the original epidemic prevention standards cannot be used to operate international flights, Qi Qi, a market watcher, told the Global Times on Monday.

But he said that it is necessary for the airlines to transport emergency anti-epidemic supplies for humanitarian reasons, and hopes that the carrier will resume cargo transport between the two countries.

Market watchers said that the move may be connected to the case of an international cargo flight pilot, who was diagnosed as an imported case in December, as the company hopes to avoid risks.

At that time, the Civil Aviation Administration of China set up a special investigation team for the matter, and stated that it would further strengthen supervision. It urged airlines to strengthen their main responsibility in epidemic prevention, and resolutely block the epidemic from passing through air channels.

Established in 1986, Sichuan Airlines served more than 300 routes in China and abroad before the epidemic.

But the cargo business is not a big one compared with its passenger transport, not to mention the business to India, Qi told the Global Times.

Sichuan Airlines usually has two regular flights from the Chinese mainland to India, including 3U8299 from Chengdu in Southwest China’s Sichuan province to Chennai, and 3U8227 from Xi’an in Northwest China’s Shaanxi Province to Delhi, but neither flight had taken off on Monday as of 5pm, according to information provider Variflight.com.

Even if there are some suspension of the cargo transport between China and India, other cargo service is still in normal, and market watchers said Chinese airlines have sufficient capacity to meet the urgent needs between the two countries.

From April 1 to April 25, the number of cargo flights from the Chinese mainland to India averaged five per day, including carried by Sichuan Airlines and SF Airlines, according to Variflight.com.

A source told the Global Times that so far the cargo service of SF Airlines is normal.

China will encourage and guide Chinese enterprises to actively cooperate, provide convenience for India to purchase all kinds of necessary anti-COVID-19 materials, and provide India with necessary support and assistance, according to the Chinese Embassy in India on Monday.

China had expressed willingness to help India to fight a resurgence of COVID-19, and the medical supplies provided by Chinese companies are normal business deals, Wang Wenbin, a spokesperson of the Chinese Foreign Ministry, said on Monday.

India has been going through a wave of COVID-19 resurgence, exacerbated by double-mutant variants. According to Indian health authorities, India’s daily new cases reached a new record on Sunday with 352,911 cases.

Chinese medical suppliers are receiving growing orders from India. According to media reports, Jiangsu Yuyue Medical Equipment, a major medical company in the country, told domestic media that it received about 18,000 orders for oxygen machines from Indian side in recent days.

The highly infectious COVID-19 mutant in India has led to several countries in the past few days barring or restricting travelers from the country, including the UK, UAE, Canada and Kuwait, according to timesofindia.com on Monday.