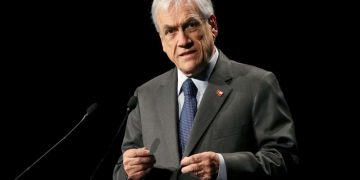 Santiago, December 20 (Reuters) – Chilean President Sebastian Pinera was slapped with a $3,500 fine on Friday after posing for a selfie on the beach with a bystander without wearing a mask as required during the coronavirus pandemic, health authorities said.

Chile has strict rules on mask wearing in all public places and violations are punishable with sanctions that include fines and even jail terms.

Pinera apologized then turned himself in shortly after the selfie surfaced on social media in early December.

The president explained he had been walking alone along the beach near his home in the posh Chilean seaside town of Cachagua when a woman recognized him and asked for a photo together.

The selfie shows the president and the woman standing very near to one another on a sunny day, neither wearing masks.

The gaffe-prone Pinera was previously photographed at a pizza party on the night protests over inequality broke out in Santiago last year. He was later seen posing for pictures at the square that had been the hub of the demonstrations after the pandemic forced protesters to stay at home.

The virus peaked in Chile in May and June, during the southern hemisphere winter, then subsided through November. Cases are on the rise again, however, prompting new restrictions and quarantines.

Chile has reported 581,135 cases of the virus since the outbreak began in March, and 16,051 deaths from the disease.