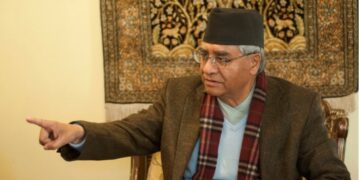 Nepal’s new Prime Minister, Sher Bahadur Deuba, took charge on July 13 under unusual circumstances.  The 75 year-old leader of the Nepali Congress was appointed on the orders of the Supreme Court which had overturned President Bidya Devi Bhandari’s decision to persist with K.P.Sharma Oli as Prime Minister, even after Oli had lost the confidence vote in the House of Representatives.

Deuba’s continuing in power (even after he wins the vote of confidence) would depend on how he tackles the COVID-19 pandemic which has created more than 660,000 positive cases and claimed 9400 lives so far.  In addition, Deuba will be expected to end the authoritarian structure and constitutional improprieties which characterized the Oli regime and made it very unpopular. He has to set in motion a political revolution of sorts.

If Deuba wins the vote of confidence, his regime will last 18 months when fresh elections will be due anyway. If he does not win the confidence vote, he will have to hold fresh polls within six months. Either way, he will have very little time to put the house in order and do well enough to merit another term in office. Currently, he is Prime Minister for the fifth time, and given his doggedness, he would want another term!

Before the dissolution of the House of Representatives on May 21, Deuba claimed to have the support of 149 members of the House with an effective strength of 271. But he may now have only 123 with him. And these are: 61 from the Nepali Congress; 49 from the Communist Party of Nepal (Maoist Centre) led by Pushpa Kamal Dahal alias Prachanda; 12 from the Upendra Yadav faction of the Janata Samajbadi Party; and one from the Rastriya Janamorcha.

Deuba needs 136 votes to pass muster, but he is short of that now. Of course, as Prime Minister, he can garner the required numbers given the loaves and fishes of office he can distribute. But the real test will be in the field of administration. He has to be able to give sustained administration in a country which has been chronically unstable.

His past record as an administrator and political manager does not augur well. Deuba’s earlier stints as Prime Minister were not successful because of controversies. Furthermore, maintaining a fine balance with his coalition partners won’t be easy, because both Pushpa Kamal Dahal alias Prachanda and Upendra Yadav of the Samajbadi Party are ambitious and crafty politicians.

Within five months after he became Prime Minister for the time in 1995, the Maoists led by Prachanda declared “Peoples’ War”. Unable  to handle it, Deuba quit in 1996. But he came back to power in 2001 even as the “People’s War” was raging. He imposed a State of Emergency to quell it. But with attempts to quell the rebellion failing, and peace talks with the Maoists going nowhere, Deuba dissolved Parliament in 2002. However, when he tried to postpone the elections, King Gyanendra dismissed him citing “incompetence.”

However, in 2004, Deuba came back to the Premiership. But in 2005, he was again sacked by King Gyanendra after the King acquired absolute power in a “ royal coup.” In 2015, Deuba struck a deal with his erstwhile foe and ideological opposite, Prachanda of the Communist Party of Nepal (Maoist Center). In August 2016, Deuba and Prachanda agreed to form a rotational government led by the CPN (Maoist Centre) and the Nepali Congress for nine months each. Deuba was sworn in as Prime Minister for a fourth stint in June 2017.

But in October 2017, all ministers from the CPN (Maoist Centre) left the cabinet after they formed an electoral alliance with the CPN (United Marxist Leninists) led by K.P.Sharma Oli in preparation for the 2017 General Elections. The Oli-Prachanda united Communist alliance swept the elections and formed a coalition government in early 2018.

However, the coalition was not built to last. By 2020, it was amply clear that Oli and Prachanda were not getting along, with Oli complaining of needless interference from Prachanda, and Prachanda complaining that Oli, as Prime Minister, was ruling arbitrarily, concentrating all powers and all instruments of power in his hands.

With the situation in Nepal spinning out of control, China and India jumped into the fray to protect their interests. China tried to keep the Oli-Prachanda Communist alliance going as it had a part in bringing about unity in the first place. But neither Oli nor Prachanda  wanted unity. India stepped in got the pro-Indian Deuba to support Oli against Prachanda.

Desperate to break the alliance with Prachanda and go for fresh elections, Oli dissolved parliament twice. But every time the Supreme Court would reverse the decision citing a constitutional violation.

But such is the nature of Nepalese politics, that it was not long before Deuba ditched Oli and switched to Prachanda, forming an alliance which claimed 149 out of the 271 members of the House of Representatives and sought permission to form a government. But the pro-Oli Nepalese President, Bidya Devi Bhandari, refused to entertain his request, allowed Oli to dissolve parliament and installed him as Caretaker Prime Minister.

The Supreme Court said that Bhandari’s action was unconstitutional and ordered the President to appoint Deuba as Prime Minister and ask him to seek a vote of confidence in 30 days as per the constitution.

Fortunately for Deuba, the Napalese economy in on the road to recovery after a setback in 2020 due to the pandemic. According to a report by the World Bank dated April 2021, after contracting by 1.9%  in 2020, the Nepalese economy showed signs of moderate recovery in the first half of 2021.

“Activity resumed in wholesale and retail trade, transport, and financial services, while favorable monsoons drove agricultural growth. However, tourism remained at a standstill and private investment anemic given high levels of overall uncertainty related to the epidemic as well as political developments, the World Bank reported in April 2021.”

“The increasing number of unemployment applications and returning migrants could adversely affect progress in poverty reduction. The recent World Bank COVID-19 monitoring survey suggests there were widespread impacts of the pandemic on jobs and incomes, with more than two of every five economically active workers reporting an incidence of job loss or prolonged work absence,” the report said.

However, credit growth recovered in recent months, albeit moderately. In the wake of the COVID-19 crisis, the Nepalese Central Bank lowered its policy rate and took additional measures to support credit to the private sector, including refinancing programs for COVID-19-affected firms. As a result, credit to the private sector grew by 11.6% in the first half of 2021, but below pre-pandemic levels, the report said.

“Over the same period, deposits increased significantly due to: higher precautionary savings, repatriation of savings by returning migrants, and reduced consumption amidst social distancing measures. Muted domestic demand has contributed to an improvement in the current account balance,” it added.