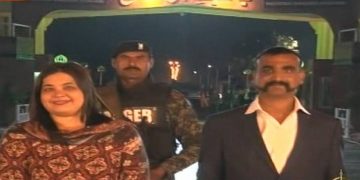 Captured Indian Air Force pilot returns home to a cheerful welcome.Video shows he gave nothing away

Captured Indian Air Force pilot returns home to a cheerful welcome.Video shows he gave nothing away Wagah, March 1 (Reuters/Dawn/Hindustan Times):  A little over 58 hours after his capture by the Pakistan army, the 38-year-old IAF pilot Wing Com. Abhinandan Varthaman, walked to his freedom at the heavily-guarded Attari border post manned by the Border Security Force.

BSF officials, prepping for the return of the IAF pilot, had canceled the retreat ceremony at the border post.

“Abhinandan is more important than the ceremony,” a local official said about the IAF officer who Prime Minister Narendra Modi said, had made “every Indian proud”.

“It is good to be back,” the pilot who was dressed in civilian clothes, wearing a blue blazer and gray dress pants, said, according to Amritsar deputy commissioner Shiv Dular Singh Dhillon.

Air Vice Marshal RGK Kapoor, who had come to receive the pilot, said the IAF was happy to have him back. The officer would be taken for a detailed medical check-up because he had ejected out of the jet, he said. Wing Commander Abhinandan is being flown out of Amritsar to Delhi.

Scores of people, many waving flags and singing, had gathered near the Wagah border crossing to give a hero’s welcome to the son of a decorated air force officer.

Prime Minister Narendra Modi joined the country to welcome the return of Varthaman, saying the nation is proud of his exemplary courage.

“Welcome Home Wing Commander Abhinandan! The nation is proud of your exemplary courage. Our armed forces are an inspiration for 130 crore Indians,” tweeted PM Modi.

The IAF officer has become the human face of the conflict between the two countries when Pakistan Army put out a series of videos that showed him in its custody. In one, he was blindfolded and blood covered and yet, responded to questions from a Pakistan Army with remarkable composure, calm and dignity.

A video released by Inter-Services Public Relations (ISPR) on Wednesday evening showed the captive Indian Air Force officer, Wing Commander Abhinandan, conversing with military officials in a congenial environment and acknowledging that he has been treated well.

Wg Cdr Abhinandan’s MiG 21 Bison aircraft was shot down over Pakistani territory earlier in the day along with another Indian jet after they violated the Line of Control. While the other plane crashed in Indian territory, Abhinandan was not so lucky.

He was captured by locals in Azad Kashmir before being taken into custody by Pakistan Army personnel. Videos of his capture showed army soldiers and officers intervening forcefully to save him from a crowd of angry citizens.

A wide cross-section of the Pakistani citizenry had subsequently called for him to be treated with respect and dignity.

“I’d like to put this on record; I will not change my statement even when I go back to my country. The officers of the Pakistan Army have looked after me very well,” Abhinandan acknowledged in the video.

“Starting from the captain who rescued me from the mob, from the soldiers, and thereafter the officers of the unit where I was taken to. I would expect my army to behave in the same way. And I’m very impressed with the Pakistan Army.”

In the video message, Varthaman said he entered Pakistan’s space to “find a target” but his aircraft was shot down.

“I was in search of the target when your [Pakistan] Air Force shot me down. I had to eject the plane which had sustained damage. As soon as I ejected and when my parachute opened and I fell down, I had a pistol with me.

“There were many people. I had only one way to save myself: I dropped my pistol and tried to run.

“People chased me, their emotions were running high. Just then, two Pakistani Army officials came and saved me. Pakistani army captains saved from the people and did not let any harm come to me. They took me to their unit where I was administered first aid and then I was taken to the hospital where I further underwent a medical exam and received more aid,” he said.

During the conversation, the official making the video could be heard asking, “Where in India are you from?”

The pilot responded: “Am I supposed to tell you that?” before diplomatically offering that: “I’m from down south.”

Upon being asked if he is married, he replied in the affirmative.

“I hope you like the tea?” the officer asked him, to which Abhinandan replied that: “The tea is fantastic, thank you.”

The official then asked: “What aircraft were you flying?”, to which the pilot responded that: “I’m sorry Major, I’m not supposed to tell you this. But I’m sure you’ve found the wreckage.”

The official then asked him, “What was your mission?”

Nandan again declined to answer, saying: “Sorry, we’re not supposed to tell you this.”

According to India Times, the Wing Commander was a member of the SKAT — Surya Kiran Acrobatic Team, “which means he’s a skilled pilot”.

His father is an ex-Indian Air Force officer.

India’s Ministry of External Affairs has asked for “his immediate and safe return”.

Following PAF’s successful strikes earlier in the day and the downing of the two Indian planes, Prime Minister Imran Khan addressed the nationand decision makers in neighbouring India to reiterate his message of peace and offer for dialogue.

“I ask India: with the weapons you have and the weapons we have, can we really afford such a miscalculation? If this escalates, things will no longer be in my control or in Modi’s,” the prime minister said.

The handing over of IAF pilot Abhinandan Varthaman to India at Wagah was delayed on Friday as he was asked to record a statement on camera by Pakistani authorities before he was allowed to cross the border, according to sources.

At 8.30 pm (local) time, the Pakistan government released the pilot’s video message to the local media in which he said as to how he was captured. “Recording of his video message caused delay in his handing over,” a source said.

In the video message, Wing Commander Varthaman said he entered Pakistan’s space to “find a target” but his aircraft was shot down. “I was in search of the target when your (Pakistan) Air Force shot me down. I had to eject the plane which had sustained damage… two Pakistani Army officials came and saved me. The army personnel saved me from the mob. The Pakistani army is very professional and I am impressed by it,” he said.

In the video, which has nearly 19 cuts, the IAF pilot is seen criticizing the Indian media.