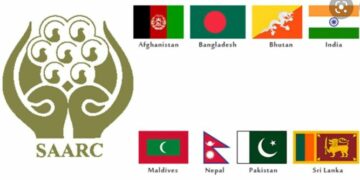 Can SAARC come out of the doldrums?

Can SAARC come out of the doldrums? But SAARC’s achievements have been significantly low as compared to the Association of South East Asian Nations (ASEAN). Intra-ASEAN trade comprises 23.4% of the total trade of ASEAN countries.

SAARC’s dismal performance gives rise to doubts as to whether a “geographical region” can be automatically assumed to become an “economic region.” No doubt South Asian nations have much in common, culturally and historically, but they are also deeply divided with all kinds of disputes  – over sovereignty, territory, sharing of river waters, ethnic groups, geo-political interests and the asymmetric distribution of political power in the region with the smaller nations grumbling about “Big Brother” India. Economic cooperation, which is the essence of regional groupings, is stymied by these divisive factors.

Lack of trust among the member countries has been the most significant factor in the under-performance of SAARC. The basic conflict has been between India and Pakistan. The India-backed SAARC–Motor Vehicles Agreement was stalled by Pakistan. Similarly, the SAARC satellite project, which India proposed, was abandoned following objections from Pakistan in 2016.

SAARC has also faced obstacles in the area of security cooperation. While cross-border terrorism emanating from Pakistan is a major concern for India, Pakistan insists that the terrorists are but rebels against “Indian rule” in Kashmir.  Bangladesh, with its many Islamic terror groups, was, till recently, a major security concern for India. This, combined with allegations about illegal Bangladeshi migration to India, and the conflict over the sharing of the waters of the river Teesta, have bedeviled Indo-Bangla relations.

Despite the grandstanding on liberalization and reforms, South Asian nations swear by trade barriers and indigenization. They are not part of international production chains. As of 2016, South Asia’s average tariffs were at 13.6%, which are significantly higher than the world average of 6.3%. SAARC countries also have long “sensitive” lists. 44 to 45% of the imports from other SAARC members fall under the sensitive lists of Bangladesh and Sri Lanka. 39% of India’s exports to South Asian countries fall under sensitive lists.

Non-tariff barriers are a well-known obstacle to intra-South Asian  trade. Sri Lankan exporters to India have often cried foul about these barriers. Dealing  with these technical  barriers  is a tedious process which puts off exporters and importers. India  has  imposed  restrictive  measures  on  its  imports  to  protect  domestic  industries. Rules of Origin, meant to curb re-export, also put restrictions on trade in countries which are industrially weak.

Connectivity is a major issue, though India, Pakistan and Bangladesh have good road and rail systems. India and Pakistan are extremely wary about the free movement of goods and people. It was only in 2016 that road and rail were opened between India and Bangladesh following the signing of the Bangladesh-Bhutan-India-Nepal Motor Vehicles Agreement (BBIN MVA). This agreement did away with trans-shipment of goods from one country’s lorry to another at the border, a time consuming and costly process.

India and Sri Lanka were earlier linked by ferry between Rameswaram and Talaimannar, but this was not resumed as Lankans feared an Indian influx. Projects to make Palaly airport and Kankesanthurai port in Sri Lanka a link with Tamil Nadu remain in the doldrums. Bhutan has opted out of the BBIN MVA for environmental reasons. Trucks from Nepal are allowed in India, but they need to possess a license before entry. These licenses are valid only for three months and renewal  is extremely  time-consuming. In 2015, Nepal was fuming over an alleged trade blockade by India over the former’s controversial constitutional changes.

In his 2010 paper for the ADB entitled: The Political Economy of Regional Cooperation in South Asia, V. V. Desai says that the asymmetrical economic and political power distribution in South Asia is a deterrent to cooperation. Between 60% and 90% of the intra-regional trade of SAARC member states (except Pakistan and Afghanistan) is with India, he points out. The imbalance between imports and exports vis-à-vis India is in the ratio of 10:1.

He suggests that the smaller economies in the region should diversify and upgrade production structures by investing large amounts of capital on harnessing newer technologies.

The ASEAN is not a body of unequal countries as SAARC is. All ASEAN members are liberal and thriving economies which are part of global value chains. This has resulted in a boom in intra-ASEAN trade. There is no one large and dominant member as in the case of SAARC.

In “Crisis States Working Papers Series No.2, 2008,” K. Sridharan reveals a fundamental difference between SAARC and ASEAN. While SAARC is a  “System of States”, ASEAN is a “Society of States”. A “System of States” is a formal, mechanically integrated, soulless body. Conflicts mark relations in the System of States. Conflicts are even given a free rein regardless of their impact on the organization .On the other hand, a “Society of States” is based on mutual adjustment, give and take, and accommodation of each other’s sensibilities. To put it in sociological terms,  solidarity in SAARC is ‘mechanical’ and in ASEAN ‘organic’.

SAARC should loosen up, Sridharan suggests. ASEAN shows that rules do not have to be hard. Soft rules, or “operational rules or rules of the game, worked out without formal agreement or even without verbal communication”, are sometimes sufficient.

“It is not uncommon for a rule to emerge first as an operational rule, then to become established practice, then to attain the status of a moral principle and finally to be incorporated in a legal convention.” Sridharan says, adding that such “operational rules” are present in ASEAN.

In ASEAN every effort is made to settle disputes amicably. Members go the extra mile to do that. Sridharan gives the example of how ASEAN tackled the conflict in southern Thailand, where clashes between the Muslim minority and the Thai government escalated in 2004, claiming f 550 lives. Even though Muslim Malaysia and Indonesia were understandably upset they were very measured in their reactions. Malaysia, which chaired the Organization of Islamic Conference (OIC), agreed not to table the southern Thailand issue at the OIC Foreign Ministers Conference in Yemen in 2005, Sridharan recalls. Recently, ASEAN launched a bid to bring peace to Myanmar by drawing up a plan to negotiate with the Junta.

But a comparable restraint among South Asian countries is “inconceivable,” Sridharan points out and adds that, unlike in ASEAN, in SAARC, the use of force is still an instrument of foreign policy.