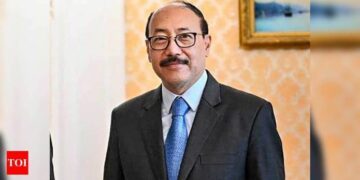 Colombo, October 1 (newsin.asia): The visit of the Indian Foreign Secretary Harsh Vardhan Shringla to Sri Lanka from October 2 to 5, will be taking place when the bilateral relationship is at the crossroads in a changing geopolitical context.

Though Chinese influence in Sri Lanka is hardly a new worry, the point is that China’s footprint and Beijing’ influence have been growing steadily and in significant ways, outstripping India’s. (See Anita Inder Singh’s article in Jamestown.org (https://jamestown.org/program/chinas-port-investments-in-sri-lanka-reflect-competition-with-india-in-the-indian-ocean/).

India’s projects or MoUs for its projects have been languishing. This, despite Colombo’s expressions of appreciation for India’s prompt assistance to meet marine disasters, the prompt supply of COVID vaccines in the first phase of the pandemic, and its efforts to foster Buddhist links between the two countries.

In 2017, India and Sri Lanka had signed MoUs for projects covering a wide range, but none of them has been implemented, raising serious concerns in New Delhi. The Eastern Container Terminal at Colombo port was to be built by India, but at the last moment, Sri Lanka called it off. An LNG project in Kerawelapitiya and a coal-fired power plant in Sampur also fell by the wayside. Even the US$ 15 million set apart for promoting Buddhist links lies unused.

On the other hand, China has massively invested in ports, roads, railways and other civil works, and is significantly involved in urban private high-rise construction also. According to Anita Inder Singh, in 2019, the value of cumulative Chinese infrastructure investment in Sri Lanka was equivalent to 14% of its GDP. In October 2020, at the height of the pandemic, when President Gotabaya Rajapaksa asked Beijing for a US$ 90 million aid grant for rural development, it was personally delivered by Chinese Communist Party Politburo member Yang Jiechi, she notes. To date, China has supplied 26 million doses of Sinopharm vaccines to Sri Lanka, far outstripping the contribution of other countries.

While Sri Lanka has been finding it hard to sell tea to India, China’s Fujian Star China International Trade Company Ltd., has entered into a 15-year MoU to promote Pure Ceylon Tea in the Chinese market and purchase 4 million kg of tea annually.

China has also been trying to move into the Tamil-majority Northern Province, which in New Delhi’s view, falls within its sphere of influence geo-strategically. When the Lankan cabinet approved a proposal to let Sinosoar-Etechwin of China install ‘hybrid renewable energy systems’ in Nainativu, Delft or Neduntivu and Analaitivu islands off Jaffna, close to the Indian shore, India objected on security grounds. New Delhi offered Colombo US$ 12 million if the project was re-allocated to India. Colombo stopped the Chinese project alright, but India is still to secure it.

Earlier in April 2018, the China Railway Beijing Engineering Group Co Ltd had won a tender worth more than US$ 300 million to build 40,000 houses in Lanka’s north. However, the then Prime Minister, Ranil Wickremesinghe, cancelled the project in October ahead of his New Delhi visit. Government then said that 28,000 houses worth US$ 210 million would be built in the Tamil areas of the North and East by an Indian firm ND Enterprises jointly with two Sri Lankan firms.

Pakistan too has been making tentative attempts to tap the Northern and Eastern Provinces. The outgoing Pakistan High Commissioner in Sri Lanka, Maj.Gen.(Rtd) Muhammad Saad Khattak had alleged in his farewell statement that he visited these areas “despite the opposition of a mutual neighbour.” The North and East have a sizeable Muslim population which Pakistan might want to woo.

In this context, it is significant that Foreign Secretary will be visiting Jaffna and Trincomalee besides Kandy.

China’s military ties with the Sri Lankan government have also grown.  China has gifted a frigate to the Sri Lanka navy. It has also undertaken to supply counter-intelligence surveillance technologies in a U$ 14 million deal.

When India’s Foreign Minister S. Jaishankar met his Sri Lankan counterpart G.L.Peiris in New York on the sidelines of the 76th.session of the UN General Assembly, he stressed the need for implementing pending Indian projects on the grounds that doing so “would give more confidence to New Delhi to move forward in enhancing relations,” thus  subtly making it a condition for better ties.

Given the concerns in New Delhi and pressure from the US (which is eager to involve Sri Lanka in its anti-China Indo-Pacific strategy) ) Colombo has begun making amends. Due to the ongoing economic crisis and also due to pressure from the Western human rights lobby,  Sri Lanka is now eager to build bridges with the West. It is trying to live down the accusation that it has become a client state of China.

The pending Western Container Terminal project in Colombo port, earmarked for the Adanis of India, has suddenly seen the light of day. On September 30, the Adanis and Sri Lankan parties signed a 35-year U$ 650 million deal to Build, Own and Transfer (BOT) the West International Terminal (CWIT).

Significantly, the deal was signed two days ahead of the Indian Foreign Secretary’s visit to Sri Lanka.

Apparently to please the US, the Lankan government has, without calling for a tender, entered into a major deal with the US company New Fortress Energy Inc., to build an LNG facility in Kerawelapitiya. The US company will have gas supply rights to the Kerawalapitya Power plant, where a 310 mw of power is operational today and an additional 350 mw is scheduled by 2023. New Fortress will initially provide the equivalent of an estimated 1.2 million gallons of LNG per day. New Fortress will also buy a 40% stake in the West Coast Power plant and build an offshore LNG receiving, storage and regasification terminal.

The Lankan opposition has lashed out at the opaque manner in which the deal was struck. But government has justified the deal on economic grounds while keeping the geopolitical aspect of it under wraps.

Market forces have been a major factor in changing Sri Lanka’s policy.  While China buys little from Sri Lanka, the US and EU are Sri Lanka’s biggest markets. India is also a big market – bigger than China at any rate. If Sri Lanka is to come out of its present dollar shortage, it has to export, but its markets are in the West (and India) and not in China. The EU has to be placated because it can deny Sri Lanka its GSP Plus duty concession on human rights counts. An EU inspection team is currently in Sri Lanka to assess its performance as per EU’s conditions for the GSP Plus concession. There is anxiety in Sri Lanka about its report as garment exports, running into billions of dollars, will be crippled if the report is adverse and GSP Plus is withdrawn.

However, Sri Lanka is not directly saying that it is cozying up to the West or India. It is portraying the change as a re-assertion of its traditional non-aligned policy. Foreign Minister G.L.Peiris has been touting the relevance of non-alignment in his recent speeches.