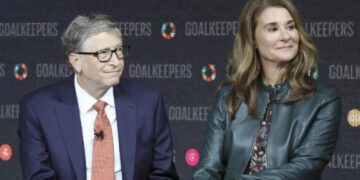 Bill and Melinda Gates to divorce, shaking the philanthropic world

Bill and Melinda Gates to divorce, shaking the philanthropic world May 4 (Reuters) – Billionaire benefactors Bill and Melinda Gates have decided to seek a divorce following 27 years of marriage, the couple said on Monday in a joint announcement that rocked the philanthropic world.

“After a great deal of thought and a lot of work on our relationship, we have made the decision to end our marriage,” the two said in a statement posted on the Twitter account of Bill Gates, who co-founded Microsoft Corp (MSFT.O).

“We no longer believe we can grow together as a couple in the next phase of our lives. We ask for space and privacy for our family as we begin to navigate this new life,” their statement said.

Financial details of the decision were not immediately clear. The couple have three children.

The two are listed as co-chairs and trustees of their nonprofit, Seattle-based Bill and Melinda Gates Foundation, which was launched in 2000. The foundation ended 2019 with net assets of $43.3 billion, according to the latest full-year financials disclosed on its website.

The foundation has focused its attention on public health, education and climate changes, with donations ranging from support of the makers of vaccines, diagnostic tests and potential medical treatments for the coronavirus pandemic to the development of solar-powered toilets.

The foundation did not immediately respond to a request for comment on how the group would be run following the Gates’ separation.