Another building collapses in Mumbai, killing 6

Another building collapses in Mumbai, killing 6 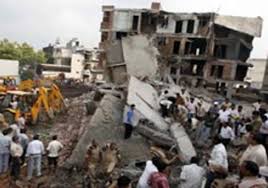 July 31 (NIA) – At least six people have been killed and scores more injured after a three storey building collapsed in Mumbai on Sunday morning, the police said.

Twelve people have been rescued while officials said that atleast 20 more were suspected to be trapped under the heavy debris. Heavy rains however have delayed efforts in searching for those missing.

Four fire trucks had already rushed into the area and were assisting in the search operations.

The government said they were yet to confirm if the building was in the list of dangerous buildings.

This is the second incident within a week, after a building collapsed in the outskirts of Mumbai on Friday killing 10 people while injuring several more.

Eight of the workers died on the spot while an immediate search operation was launched to look for workers possibly trapped under the rubble.

Heavy rains have lashed out across Mumbai in the past week leading to several areas being submerged in water.

Government officials have issued a warning to residents in the city not to step out of their homes unless it was absolutely essential.