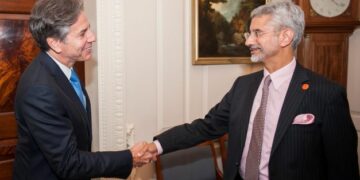 Airport attack brings India back into reckoning in Afghanistan

Airport attack brings India back into reckoning in Afghanistan Colombo, August 29 (Counterpoint): Those who wrote off India and gave Pakistan the thumbs up after the Taliban took over Kabul on August 15 may have to eat their words now.

After the bombing of the Kabul airport perimeter by the ISIS-Khorasan Province (ISIS-KP) on Thursday resulting in the death of 13 US servicemen, the Taliban’s stony silence on the incident, and the US retaliatory strike against the ISIS-KP on Friday, the relationship between the US and the Taliban and its ardent advocate, Pakistan, has cooled.

In this context, the US is again seeking India’s help as it did earlier when it needed New Delhi to prop up the regimes of Hamid Karzai and Ashraff Ghani in Kabul.

The US, which had used Pakistan to get talks with the Taliban going at Doha in 2020, was nevertheless extremely wary about Islamabad’s toxic nexus with the Taliban and other anti-US terror groups such as the Haqqani Network.

Significantly, US Secretary of State Antony Blinken spoke to Indian External Affairs Minister S.Jaishankar on Saturday about Afghanistan and coordination in tackling the growing crisis there. Blinken tweeted: “Spoke with Indian External Affairs Minister Dr S Jaishankar today to discuss our shared priorities including continued coordination on Afghanistan and in the United Nations. Look forward to continuing to deepen our partnership.”

And Jaishankar tweeted: “Spoke to US Secretary of State Blinken. Continued our discussions on Afghanistan. Also exchanged views on the agenda of UNSC.”

The Hindu quoted US State Department spokesman Ned Price as saying that Blinken and Jaishankar agreed to remain “closely coordinated on shared goals and priorities to deepen the US-India partnership.”

After the Kabul bombing, India said that the attack reinforced the need for the world to stand unitedly against terrorism, a sentiment which echoed in Washington. Like the US, India is deeply worried about the ISIS-KP and the Taliban’s tolerance of it, despite a background of animosity. Taliban’s stony silence on the Kabul bombing and its failure to condemn the ISIS-KP which owned the attack, indicate an underlying nexus. The Taliban’s current policy is to make peace with all Afghan groups, including the ISIA-KP. Khallilur Haqqani of the Haqqani Network (which is now an ally of the Taliban) had made this clear in his interview to Pakistan’s Geo TV on August 24.

Though India was marginalized during the peace process and the Doha talks (while Pakistan was involved) New Delhi has deep stakes in Afghanistan. During the two decades of non-Taliban rule, India had pumped in US$ 3 billion in developmental aid. Further, if Pakistan-sponsored terrorist activities in India were to be stopped or curtailed, the Taliban and other terror groups in Afghanistan, which were in cahoots with Pakistan, had to be kept in check.

The Hindu quotes the National Investigative Agency (NIA) to say that ISIS-KP comprises cadres of the Pakistan-based outfit Lashkar-e-Taiba (LeT). The NIA had busted an Indian module that was in contact with some ISIS-KP operatives, and also some others in Syria, Iraq and Africa, through an Instagram channel named ‘Chronicle Foundation’.

Egged on by Pakistan-based recruiters, some members had attempted to join the outfit in Afghanistan via Iran in April 2019. The NIA had conducted searches in Jammu & Kashmir, Karnataka and Kerala and arrested ten members of the module headed by one Mohammed Ameen from Malappuram in Kerala. When ISIS-KP was founded in 2015 in Nangarhar Province in Afghanistan, more than 24 Indians had joined it. The Hindu quotes counter-terrorism experts to say that the ISIS-KP is but a “smokescreen to conceal the role of elements within Pakistan in raising a group for targeted strikes in Afghanistan while ensuring deniability.”

A counter-terrorism expert pointed out that the outfit’s former chief, Aslam Farooqi alias Abdullah Orokzai, is a Pakistani citizen. He was captured by Afghan forces in April 2020 in connection with the Kabul Gurudwara attack which took place on March 25, 2020. He confessed to his links with the LeT. The ISIS-KP had claimed responsibility for the attack which was carried out allegedly by an Indian national-led module. The leaders had been identified as Mohammed Muhasin from Kerala. Muhasin was killed in the shootout with the Afghan forces.

Again in March, another key ISKP commander named Munib Mohammed confessed on capture that he was a Pakistani having links with the Lashkar e Toiba and the Haqqani Network.

US Cool To Pak NSA

Although the US used Pakistan to persuade the Taliban to talk to it and Pakistan was part of the Doha US-Taliban talks, Washington had deep suspicions about the toxic nexus between Pakistan and Taliban and the double role Pakistan had been playing in Afghanistan since 2001. When Pakistan’s National Security Advisor, Dr. Moeed Yusuf, and the ISIS Director-General, Lt.Gen. Faiz Hameed, visited Washington in July 2021,  US officials had taken a tough stance on Pakistan’s nexus with terrorists in Afghanistan. President Biden had also sent a subtle message to Pakistan Prime Minister Imran Khan by not talking to him after coming to power. On his part, Prime Minister Imran Khan openly complained that the US had abandoned Pakistan in favour of India.

However, the US did not change its plan of disengaging itself in Afghanistan by August 31. And in an effort to get a safe exit passage for its troops, citizens and affiliates, it entered into a detente with the Taliban which had taken over Kabul on August 15. But the attack on the airport by the ISIS-KP and the Taliban’s unwillingness to take action against the perpetrators reversed the trend. The US has not only carried out a retaliatory strike and killed two ISIS-KP masterminds in Nangarhar Province but has also warned that the ISIS-KP could carry out more bombings in the next 36 hours and that the US would respond in kind.

It is against this background that the US-India axis on Afghanistan is being revived. The coming weeks would see important US-India initiatives, which could affect Pakistan’s role in Afghanistan.

The US-India nexus could affect China too. But it cannot be assumed that China will stand with Pakistan through and through. China’s relationship with the Taliban is not “brotherly” as Pakistan’s is. China’s interest in Afghanistan is basically economic as seen from the perspective of its flagship international project, the Belt and Road Initiative (BRI). It is also eyeing Afghanistan’s mineral wealth. China needs Taliban’s help to maintain peace in Afghanistan to pursue its economic objectives. It would need the Taliban’s help also to contain the separatist East Turkistan Movement in Xinjiang. But if the Taliban does not oblige on these counts, China could abandon the Taliban and watch from the sidelines the US trying to cripple the Taliban regime.

The Taliban is already facing economic sanctions from the West. The Americans have frozen more than US$ 9 billion of Afghanistan’s assets in the US, and the World Bank and the IMF have suspended dealings with Kabul.  The Taliban can turn to Beijing for succour. But it may not be able to ensure the peace which Beijing needs.

There is resistance to the Taliban in the Panjashir Province where the Ahmad Massoud group is still to surrender. The Taliban might find it hard to tame Ahmad Massoud’s Mujahideen as it is likely to be helped by the US with arms and money. The Massoud group has said that if talks with the Taliban to form an inclusive government did not succeed, it would launch a movement to liberate the whole of Afghanistan.