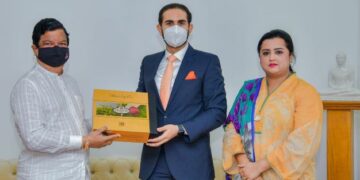 A Pakistan High Commission release said that a very fruitful discussion was held to strategize a way forward in streamlining and enhancing bilateral trade under the Pakistan-Sri Lanka Free Trade Agreement, with a focus on high potential sectors.

The Acting High Commissioner briefed the Lankan Trade Minister on the various initiatives being undertaken by the Government of Pakistan to boost bilateral trade, investment and economic cooperation, with a particular focus on promoting Pakistan’s Buddhist tourism in Sri Lanka.

Both sides agreed on undertaking all possible measures to resolve impediments in a mutually beneficial way in order to realize the high bilateral trade potential between the two friendly countries.

The Acting High Commissioner invited Hon. Trade Minister to undertake a visit to Pakistan at an early date which will give a boost to bilateral trade, joint ventures and economic cooperation between Pakistan and Sri Lanka.

In an article published in www.stimson.org on March 22, 2021, Riaz Khokhar and Asma Khalid say that  Pakistan has Free Trade Agreements (FTA) with China, Malaysia, and Sri Lanka, but only with Sri Lanka does it have a trade surplus.

The removal of harmful trade barriers could take the bilateral trade up to USD $2.7 billion, Khokhar and Khalid added.

In February 2021, commerce secretaries from both sides agreed to revive the Joint Working Groups (JWGs) to address technical impediments to bilateral trade and effectively implement the FTA.

Although the financial value of bilateral trade appears to be minimal, the diplomatic significance of the FTA and the JWGs indicates continued desire and potential for strengthening economic relations. Imran Khan’s meeting with Sri Lanka’s Prime Minister Mahinda Rajapaksa during his visit to the island in February 2021 had further animated this mutual desire to expand trade, tourism, and investment, Khokhar and Khalid said.

“However, this is unlikely in the short-term since Pakistan is yet to develop an efficient road and rail network for continental trade with the Central Asian Republics. Instead, Colombo may be better served to invest in the special economic zones under CPEC,” Khokhar and Khalid said.