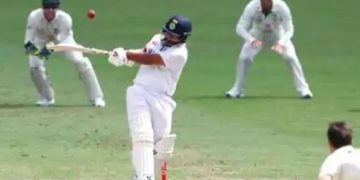 India's Rishabh Pant bats during play on the final day of the fourth cricket test between India and Australia at the Gabba, Brisbane, Australia.(AP)

Brisbane, January 19 (Hindustan Times) – India has beaten Australia in the fourth Test by 3 wickets and have won the series 2-1. Shubman Gill missed his century but Pant guided India to victory.

There were several players who were playing for the first time for India in this series. Saini, Gill, Natarajan, Sundar and Siraj made their debuts after the first Test. Pant was looking to shut his critics, Thakur was playing his second match. But everyone contributed big time as India won the series.