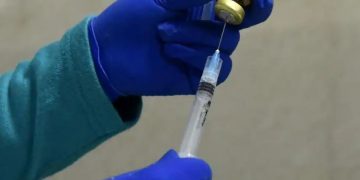 by Editor
in Around South Asia, Around The World, Coronavirus, Health, India
Reading Time: 2min read
3 0 New Delhi, January 8 (Hindustan Times) – A second nationwide drill to test the country’s preparedness for conducting a mammoth vaccination drive is set to be conducted on Friday across 737 districts in 33 states and Union Territories, days after India’s drug regulator gave its clearance for two Covid-19 vaccines.

Friday’s drill will be the largest undertaken in the country so far. A dry run was carried out in just eight districts on December 28-29. The first countrywide drill covering 74 districts was held on January 2.

“The lessons learnt from the earlier exercise will be made use to execute another dry run. Whatever was lacking earlier has been rectified, and will be tested in Friday’s dry run,” Union health minister Harsh Vardhan told states and Union Territories in an online meeting on Thursday.

Vardhan, who faced questions about the timeline for receiving vaccine shots at the meeting, added: “It [supply of vaccines] is in works, and we will intimate you [states/UTs] all soon as we are moving towards the final stages of vaccination in the country.”

His remarks came on the day the Union health ministry said in a communique that states and UTs are likely to receive the first supply of Covid-19 vaccines shortly and asked them to remain prepared to accept the consignments.

India’s drug regulator on January 3 approved the Oxford-AstraZeneca vaccine and the indigenously developed Bharat Biotech vaccine for restricted emergency use in the country. Officials have indicated that vaccination drive will begin in the second week of January.

Friday’s mock drills are another attempt to test the infrastructure and the logistics that will play a major role in immunising the country of 1.3 billion people, and familiarise district- and block-level officials on all aspects of Covid-19 roll-out.

The exercise will also involve testing the Co-WIN digital platform that will be the backbone of the Covid-19 vaccine delivery management system. The app will be used to provide real-time information on vaccine stock, cold storage status and help coordinate the dates and venue for vaccination with recipients.