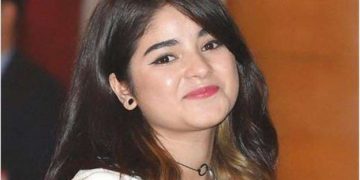 May 30 (News18) – Actress Zaira Wasim has become controversy’s favourite child in the last one year. Once again, she was targeted by trolls that led her to delete her social media accounts on Twitter and Instagram.

On May 27, the Dangal actress quoted from the holy Quran after the recent locust attacks in parts of the country. In her now-deleted tweet, Zaira quoted the verse, “So We sent upon them the flood and locusts and lice and frogs and blood: Signs openly self-explained: but they were steeped in arrogance- a people given to sin -Qur’an 7:133 (sic).”

Soon after, the netizens trolled her brutally alleging that she was justifying a heinous environmental crisis using religious text. Some criticized her for being insensitive to the loss of human lives.

Following the backlash, she deleted her social media accounts.

This is not the first time when the Secret Superstar actress has faced backlash for her posts. When she chose to quit Bollywood a year ago, citing it to be an interference between her and her faith, netizens criticized her for that too.

Zaira Wasim’s last Bollywood outing was The Sky Is Pink, along with Priyanka Chopra, Farhan Akhtar and Rohan Saraf.