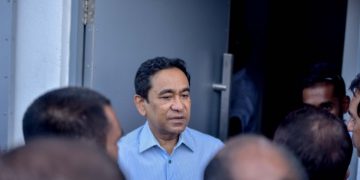 Yameen argued that since he deposited US$ 1 million in the escrow account as instructed, he could not be charged with money laundering

Male, July 22 (AVAS): Former Maldivian President Abdulla Yameen on Sunday defended himself in court claiming that he did not transfer US$ 1 million into the escrow account set up between himself and Anti-Corruption Commission (ACC) as agreed in order to avoid ‘committing a crime’.

Two cheques worth US$ 1 million issued by SOF Private Limited were deposited into President Yameen’s saving account at Maldives Islamic Bank (MIB), which was later moved to Yameen’s General Investment account at the same bank.

SOF Pvt Ltd is said to have embezzled funds received by the Maldives Marketing and Public Relations Corporation (MMPRC) in the biggest corruption scandal witnessed by the country.

Yameen’s failure to transfer the original funds into the escrow account  and depositing funds from another source can be assumed to be an attempt to launder the original funds which are suspected to be illegal funds. His action prompted the Prosecutor General to slap money laundering charges against the former President.

Speaking at the final preliminary hearing of his money laundering trial at the Criminal Court on Sunday which was aired live on national TV, President Yameen revealed for the first time that it was he himself who had requested to set up an escrow account as ‘he did not wish to keep suspicious funds in his account’. However, as the escrow agreement had a clause stating that no illegal activities may be committed, he refrained from touching the funds in his MIB account as he believed conducting a transaction involving the same funds can be classified as an illegal activity, and instead deposited US$ 1 million from his account at Bank of Maldives.

‘There are suspicions on the funds in the MIB account. If I conduct a transaction with the same funds, it may be an illegal activity. Therefore, I did not wish to make any such transactions’, Yameen said,

‘At the time when the US$ 1 million in question was deposited into my account, the account already had around U$ 3 to 4 million. It is not possible to find the exact US$ 1 million that was deposited by SOF. I cannot recover the same cheque. Money is money. Even if the funds I deposited did not originate from the SOF cheques, I still handed over US$ 1 million to be kept under ACC supervision. A charge shouldn’t have been raised against me in the first place’, he said.

He was not notified by the bank when the deposit was made. He came to know about the deposit only when then ACC President Hassan Luthufee brought the matter to his attention, Yameen said. After that he immediately asked to investigate the matter.

The former President further said no investigate authorities have asked him to return the funds to date, and no authorities have declared the funds to be illegal funds or linked to corruption. While the Financial Intelligence Unit (FIU) at the Maldives Monetary Authority (MMA) was notified of the deposit, FIU had not noted any problems with the funds. Although ACC also had the authority to stop the funds, they had not acted in such a manner, noted Yameen.

The next hearing is scheduled for August 4.