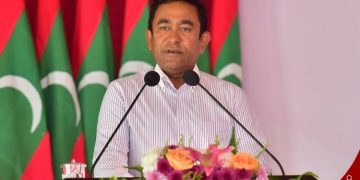 Male, February 6 (newsin.asia): Embattled Maldivian President Abdulla Yameen said in his address to the nation on Tuesday, that he had declared a State of Emergency because the Supreme Court had a plan to overthrow the government by first making it dysfunctional through a series of orders.

In his address to the nation on Tuesday afternoon, President Yameen said that the “shocking” Supreme Court order had threatened to “cripple” the functioning of the state.

“I had to ask myself why the Supreme Court named just these nine people (while ordering the release of opposition leaders).”

The Supreme Court had labeled the nine as “political prisoners” to set them apart from other convicts in jail for similar offences.

The president reiterated that repeated attempts to contact the chief justice to share concerns with the order had failed.

According to the President, the most surprising fact about the court order was to strip the judicial watchdog of the authority to summon the top court bench or question the court order.

“We had no way to hold the Supreme Court accountable. We couldn’t risk holding a (Judicial Service Commission  meeting sit-down as its members could then be held to be in contempt for questioning or challenging the court order,”  Yameen said.

After rejecting the Prosecutor General’s concerns, the top court had even refused to accept the letters he had sent to the Chief Justice highlighting the issues his Prosecutor General nd Attorney General had over the court order.

President Yameen revealed that the police had uncovered evidence that the Chief Justice Abdulla Saeed, and Justice Ali Hameed and the recently arrested Judicial Administrator, Hassan Saeed, had all purchased apartments which had raised several red flags.

The President noted that the Supreme Court had revoked the warrant to arrest the Judicial Administrator which led to increased suspicions that the two top court judges were involved in something more “sinister”.

“When they blocked the authorities from even investigating the administrator, we knew that there was no way the judges could be investigated given their immunities,” he explained.

Chief Justice Saeed had initiated deliberations with the top court bench to remove the Attorney General from office.Saeed  had also wanted to reinstate former police chief Ahmed Areef and his successor Ahmed Saudhee. They were sacked shortly after the Supreme Court order to released nine priisoners including former President Nasheed.

According to the President, Chief Justice Saeed had pushed the bench to hear a case for his impeachment. But this failed because the rest of the judges refused to comply.

“The constitution clearly states how a President can be impeached. The Supreme Court has no authority to do so. It also has no jurisdiction to reinstate the police chief. But when the Chief Justice were pushing for these things beyond his mandate or jurisdiction, we had to take it seriously. We had to find out why,”  Yameen  said.

President said he had no option other than to declare a national Emergency as the “entire judiciary had been compromised.”

“We needed to find out if there was any link between the sudden change in the mentality of the Chief Justice and his new found riches. No one is above the law. Not even judges. I had no other choice. No other way to save the nation,” he declared.

The President also revealed that police have now made “major headway” in the investigation which he said would be revealed to the public soon.

“We will find out why this happened. How thick this plot is. How deep the roots go. I ask the people to support me. Give me the chance to get to the bottom of this,” President urged.