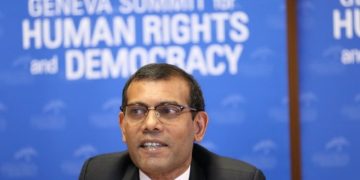 Yameen lifted State of Emergency because its objectives had been achieved, says Nasheed

Yameen lifted State of Emergency because its objectives had been achieved, says Nasheed Share on WhatsApp
Male, March 22 (newsin.asia): Former Maldivian President and Maldivian Democratic Party (MDP) leader Mohamed Nasheed has said that President Abdulla Nasheed has lifted the State if Emergency because he had obtained his      objectives using the draconian powers given by it.
Reacting to the lifting of the 45-day State of Emergency on Thursday, Nasheed now in exile in the UK, said: “President Yameen has lifted the State of Emergency as he now has no need for it. He imposed the State of Emergency to overrun the Judiciary and the Legislature and used it to unlawfully arrest Parliament Majority Leader Ibrahim Mohamed Solih and Chief Justice Abdulla Saeed along with SC Justice Ali Hameed and all remaining opposition leaders. He also used unlawful State of Emergency powers to hold hostage Ibrahim Siyad Gasim.”
“President Yameen is announcing a New Normal for the Maldives – Authoritarian rule as a puppet State controlled by China. It is sad that the International community have still not got their act together, but we assure all democracy , human rights and freedom loving people of the world that we will not give up, we will fight against the odds and we will overcome.”
The President’s Office said in a statement on Thursday that the State of Emergency was lifted because the police had made sufficient progress in investigating the attempted coup by a set of top opposition politicians and Supreme Court judges including the Chief Justice Abdullah Saeed
(The featured image at the top shows former President Mohamed Nasheed)
SendShare4TweetShareShare