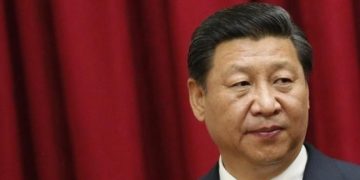 Xi’s thoughts to be enshrined in the Chinese constitution

Xi’s thoughts to be enshrined in the Chinese constitution

by Editor
in Around South Asia, Around The World, China, Top Story
Reading Time: 1min read
1 0 Xi’s eponymous “thought” was already enshrined in the Communist Party constitution at a major congress in October, elevating him to the same status as modern China’s founder Mao Zedong.

The architect of China’s economic reforms, Deng Xiaoping, is the only other leader whose name appears alongside his guiding principle in both the state and party constitutions.

The party’s Central Committee proposed at a two-day meeting that “Xi Jinping Thought on Socialism with Chinese Characteristics for a New Era” should also be added to the state constitution, said the official Xinhua news agency.

The constitutional change must be approved by the National People’s Congress, which is expected to hold its annual plenary session in March.

The elevation of Xi, 64, into the Communist Party constitution in October had already brought him into the pantheon of the country’s most powerful leaders.

The congress also unveiled a new seven-member ruling council that did not include a clear successor to Xi, leaving the impression that he could break with recent tradition and seek a third term in office in 2022.

They accuse Beijing of following a broad pattern of harassment, detention and abuse in dealing with dissidents.