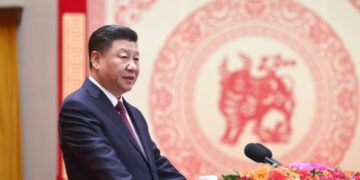 Beijing, February. 13 (Xinhua):  As China rings in the Year of the Ox, President Xi Jinping has urged promoting “the spirit of the ox” in pursuit of fully building a modern socialist China.

“We must promote the spirit of the ox in serving the people, driving innovative development and working tirelessly,” Chinese President Xi Jinping said in his message on Chinese New Year’s Day.

Xi, who is also general secretary of the Communist Party of China (CPC) Central Committee and chairman of the Central Military Commission, highlighted the spirit of serving the people as willing steers, blazing new trails in development as “pioneering bulls and engaging in an arduous struggle as hardworking oxen.”

Xi promoted the spirit at a New Year gathering organized by the National Committee of the Chinese People’s Political Consultative Conference on Dec. 31, 2020.

“We must promote the spirit of the ox in serving the people, driving innovative development and working tirelessly. We must continue to be careful, as we were in the past, guarding against arrogance and impetuosity, and continue to fear no hardship and be enterprising, marching forward bravely on the new journey of fully building a modern socialist country, and marking the centenary of the CPC with outstanding achievements,” Xi said.

In China, an ancient civilization nurtured by its agriculture and fertile lands, the ox has always been considered an important animal as they help farmers cultivate the farmlands.

“In Chinese culture, the ox is a symbol of diligence, dedication, endeavor and strength,” Xi said.

Stressing the virtues of modesty and prudence, Xi called for efforts to achieve the second centenary goal and the great rejuvenation of the Chinese nation, and make new and greater contributions to the noble cause of securing peace and development for all mankind.

Despite complicated international and domestic situations in 2020, China has made major strategic achievements in the fight against the COVID-19 epidemic, conquered serious floods and achieved positive economic growth.

The country has lifted nearly 100 million rural poor out of poverty over the past eight years, securing a decisive victory in ending absolute poverty.

These hard-won, remarkable achievements would not have been attained without the spirit of the ox, which will play a more important role in the year 2021 as China strives to achieve rural vitalization, implement a new development paradigm and deepen reform and opening up.

(The featured image at the top is by Xinhua/Ju Peng