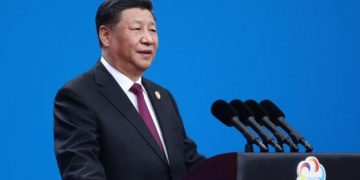 Xi made the remarks while addressing a meeting marking the 70th anniversary of the Chinese People’s Volunteers’ entering the Democratic People’s Republic of Korea to fight in the war.

It is necessary to speak to invaders in the language they know: that is, a war must be fought to deter invasion, and force must be met by force, Xi said. “A victory is needed to win peace and respect.”

He said the Chinese nation will never cower before threats, or be subdued by suppression.

Xi noted the need to pool the formidable national strength that unites all, regardless of how times may evolve.

He also called for fostering the valor of the nation that fears no death, and stressed the need to promote the national wisdom of keeping to the right path, making innovations, and striving to march forward.

Here are 7 quotes from the speech: