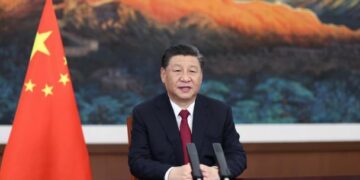 Colombo April 20 (newsin.asia): The Chinese President Xi Jinping told the opening plenary of the Boao Forum for Asia on Tuesday, that global governance should reflect the evolving political and economic landscape in the world.

“World affairs should be handled through extensive consultation, and the future of the world should be decided by all countries working together. We must not let the rules set by one or a few countries be imposed on others, or allow unilateralism pursued by certain countries to set the pace for the whole world,” he said.

Xi was speaking on the conference theme: “A World in Change: Join Hands to Strengthen Global Governance and Advance Belt and Road Cooperation.”

The Chinese President said: “What we need in today’s world is justice, not hegemony. Big countries should behave in a manner befitting their status and with a greater sense of responsibility.”

Xi drew comfort from the fact that the world is continuing to become  multi-polar. Further, economic globalization is showing renewed resilience and the call for upholding multilateralism and enhancing communication and coordination has grown stronger.

“We need commitment to justice to create a future of mutual respect and mutual learning. Diversity is what defines our world and makes human civilization fascinating,” he said.

Calling for openness in international dealings, Xi said: “In this age of economic globalization, openness and integration is an unstoppable historical trend. Attempts to erect walls or decouple, run counter to the law of economics and market principles. They would hurt others’ interests without benefiting oneself.”

The Chinese President said that it is time countries shed their Cold War mentality. “The COVID-19 pandemic has made it all the more clear to people around the world that we must reject the cold-war and zero-sum mentality and oppose a new Cold War and ideological confrontation in whatever forms.”

“In state-to-state relations, the principles of equality, mutual respect and mutual trust must be put front and center. Bossing others around or meddling in others’ internal affairs would not get one any support. We must advocate peace, development, equity, justice, democracy and freedom, which are common values of humanity, and encourage exchanges and mutual learning among civilizations to promote the progress of human civilization,” he said.

“We need to promote trade and investment liberalization and facilitation, deepen regional economic integration, and enhance supply, industrial, data and human resources chains, with a view to building an open world economy,” he added.

Xi called for the safeguarding of the UN-centered international system, preserving the international order underpinned by international law, and upholding the multilateral trading system with the World Trade Organization at its core.

Calling for the deepening international partnership, Xi said that the Belt and Road Initiative (BRI) is “a public road open to all, not a private path owned by one single party.”

“All interested countries are welcome aboard to take part in the cooperation and share in its benefits. Belt and Road cooperation pursues development, aims at mutual benefits, and conveys a message of hope,” he added.

“We will act in the spirit of openness and inclusiveness as we work with all willing participants to build the BRI into a pathway to poverty alleviation and growth, which will contribute positively to the common prosperity of humankind,” Xi promised.

The President said that China will work with all sides to promote “hard connectivity” of infrastructure and “soft connectivity” of rules and standards, ensure unimpeded channels for trade and investment cooperation, and actively develop Silk Road e-commerce, all in a bid to open up a bright prospect for integrated development.

He appealed to participating countries to seize the historical opportunities in a new round of scientific and technological revolution and industrial transformation, boost the digital economy, and step up exchanges and cooperation in such areas as artificial intelligence, biomedicine and modern energy, so that the fruits of scientific and technological innovation can be turned into greater benefits for people in all countries.

Xi sought full play for the World Health Organization (WHO). “It is important that we bolster international cooperation on the R&D, production and distribution of vaccines and increase their accessibility and affordability in developing countries so that everyone in the world can access and afford the vaccines they need.”

“It is also important that we take comprehensive measures to improve global governance on public health security and work together for a global community of health for all,” he said.

Xi pledged to build closer partnership in health. “Chinese businesses have already started joint vaccine production in BRI participating countries such as Indonesia, Brazil, the United Arab Emirates, Malaysia, Pakistan and Turkey. We will expand cooperation with various parties in infectious disease control, public health, traditional medicine and other areas to jointly protect the lives and health of people in all countries,” he said.

Further China will build a closer partnership for green development. “We could strengthen cooperation on green infrastructure, green energy and green finance, and improve the BRI International Green Development Coalition, the Green Investment Principles for the Belt and Road Development, and other multilateral cooperation platforms to make green a defining feature of Belt and Road cooperation.”

Xi said that however strong it may grow, China will never seek hegemony, expansion, or a sphere of influence. Nor will China ever engage in an arms race.

“China will take an active part in multilateral cooperation on trade and investment, fully implement the Foreign Investment Law and its supporting rules and regulations, cut further the negative list on foreign investment, continue to develop the Hainan Free Trade Port, and develop new systems for a higher-standard open economy. All are welcome to share in the vast opportunities of the Chinese market,” he added.

The Chinese President said that once the pandemic gets under control, China will host the second Conference on Dialogue of Asian Civilizations as part of its active efforts to promote inter-civilization dialogue in Asia and beyond.