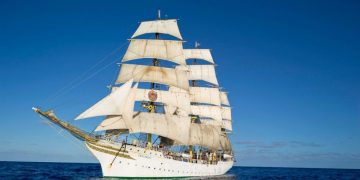 Colombo, Oct 24 (NIA) – The world’s oldest working full-rigged ship, SS Sørlandet from Norway, has arrived in the Sri Lankan capital while on a two-year circumnavigation of the world, the Norwegian Embassy in Colombo, said on Monday.

The ship has on-board 70 high school students from A+ Academy. During their stay in Colombo they will greet Sri Lankan maritime students, and the ship will be part of several events hosted by the Royal Norwegian Embassy.
The visit to Colombo is only one of 44 ports and 22 countries the ship will visit on her two-year circumnavigation.
The 70 students on board is a mix of Norwegian and international high school students attending the on board boarding school.
“Nicknamed “The pearl of Norway”, she is quite a beauty with her 27 sails. She has sailed the oceans of the world for close to 90 years, most of the time as a training ship, hosting students and cadets. But, her story also has a darker side, when she was used as a prison ship during the second world war,” the Embassy said in a statement.
The ship will end its visit on Oct 30 and set sail for the Maldives.
SendShareTweetShareShare