by Editor
in Around South Asia, Around The World, China, World
Reading Time: 4 mins read
18 0 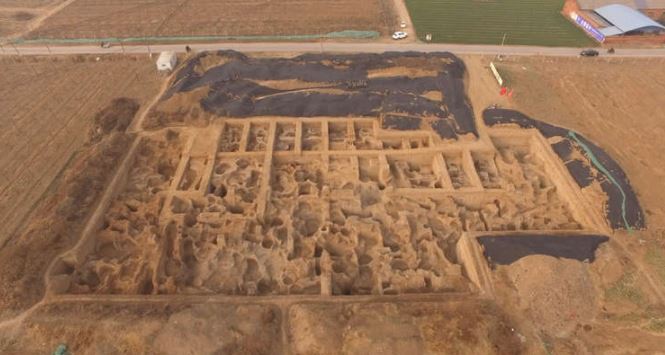 August 7 (National Geographic) – Archaeologists excavating the remains of Guanzhuang—an ancient city in China’s eastern Henan Province—have discovered what they believe is the oldest-known coin mint, where miniature, shovel-shaped bronze coins were mass-produced some 2,600 years ago.

Their research, published today in the journal Antiquity, gives weight to the idea that the first coins were minted not in Turkey or Greece, as long thought, but in China.

The walled and moated city of Guanzhuang was established about 800 B.C., and its foundry— where bronze was cast and beaten into ritual vessels, weapons, and tools—opened in 770 B.C., according to Hao Zhao, an archaeologist at Zhengzhou University and the paper’s lead author. But it wasn’t for another 150 years that workers began minting coins outside the southern gate of the inner city.

Using radiocarbon dating, the team determined the mint began operating sometime between 640 B.C. and no later than 550 B.C. While other research has dated coins from the Lydian Empire in what is now Turkey to as early as 630 B.C., Zhao notes that the earliest mint known to have produced Lydian coins dates to sometime between 575 B.C. and 550 B.C.

During their excavation, the researchers found two spade coins—which look like shrunken versions of the gardening tool—and dozens of clay molds used to cast them. One coin was in near-perfect condition: Just shy of 6 inches long and about 2.5 inches wide, the bronze coin weighed about 27 grams, or less than six sheets of standard-size computer paper.

Coins are often found “bundled together and completely lacking any of the original context of their production or their use,” says Bill Maurer, a professor of anthropology at the University of California Irvine and director of the Institute for Money, Technology and Financial Inclusion. “But in this case, you’ve got the whole mint, and you’ve got the casts that were used.”

The completeness of the discovery is what’s remarkable, says Maurer, who was not involved in the research. Finding both coins and their molds is what allowed the researchers to radiocarbon date the mint, lending weight to their assertion that it’s the oldest known in the world.

Coins are typically discovered isolated or hoarded away from where they were made, stashed in the rafters of a house or buried in a hole in the ground, Maurer says, “completely divorced from any sort of context that you can definitively say was associated with the coins themselves.”

If such coins are found with evidence of fire damage, researchers can radiocarbon date them—but they won’t be sure “if that burning has anything to do with the time period during which the coin was used,” Maurer explains, or if the coins were instead burned in a haphazard fire.

But here, “you’ve got a foundry which is full of carbon residue associated with the production of the item itself,” Maurer says, which can prove how old the coins and mint actually are.

George Selgin, director of the Center for Monetary and Financial Alternatives at the Cato Institute, says that while the discovery is impressive, “It doesn’t change our basic understanding of when the first coins were produced. And it doesn’t necessarily mean that China did it first.”

That’s because while this research proves how old this particular Chinese mint and its coins are, it doesn’t definitely conclude that the Chinese remnants are older than the Lydian coins “often cited as an alternative starting point for coinage,” says Selgin, who was also not involved in the research.

Zhao and his team speculate that the mint’s location—close to the presumed seat of the official city administration—could signal that “the minting activities were at least acknowledged by the local government.” But they hasten to add that conclusions can’t yet be drawn: “Political involvement in spade-coin production [remains an issue] for further research,” they wrote.

There are two prevailing theories about the origins of money: that it was created so that merchants and customers could barter, or so that governments could collect taxes and debts.

Maurer says while the discovery proves nothing, what it “demonstrates—in the routinization, the standardization, and the mass production of these items associated with a political center— lends weight to the hypothesis that anthropologists and archaeologists have long held: that money emerges primarily as a political technology, not an economic technology.”