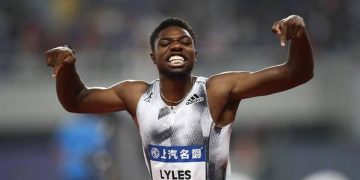 More than 2,000 athletes from over 200 countries and territories will take part in the event, set to begin on September 27. American Noah Lyles has caught the eye with his winning performances of late. | Photo Credit: AP

September 27 (AFP) – The first World Athletics Championships of the post-Usain Bolt era gets underway in Doha on September 27 with the sport desperately seeking a new superstar as it tackles a slew of ongoing doping controversies.

More than 2,000 athletes from over 200 countries and territories will take part across 10 days of competition at Doha’s Khalifa International stadium.

For athletics fans, the championships will also provide clues to likely contenders at next year’s Tokyo Olympics.

As ever, all eyes will be on the sprints, where the retirement of Jamaican superstar Bolt in 2017 has left a gaping chasm where an icon once stood.

The likeliest successor to Bolt’s throne appears to be US star Noah Lyles, the Diamond League champion and overwhelming favourite for gold in the 200 metres.

Lyles, 22, is expected to target a 100m-200m double in Tokyo next year but is only entered in the longer event in Doha.

That leaves the way clear in the 100m for rival Christian Coleman, who is chasing his first major outdoor championship title.

But the 23-year-old heads into the championships struggling to shake off sceptics after he avoided a drug ban earlier this month.

Coleman could have been facing a two-year ban after it was revealed he had recorded three drug-testing “whereabouts” failures in a 12-month period. He escaped suspension on a technicality.

In the women’s sprints, meanwhile, Jamaica’s Shelly-Ann Fraser-Pryce is chasing a record fourth 100m gold at the age of 32, two years after skipping a season for the birth of her son in 2017.

Norway’s Karsten Warholm is set for a battle royale in the men’s event with American champion Rai Benjamin. In the women’s race, Olympic champion Dalilah Muhammad is hoping to improve her new world record of 52.20sec set at the US trials in July.

There is no place in Doha though for South Africa’s 800m star Caster Semenya.

The double Olympic champion misses out after losing her long-running battle against regulations requiring her to take medication to lower her naturally-elevated testosterone levels.

The Coleman controversy, meanwhile, was an unwelcome reminder for the International Association of Athletics Federations (IAAF) that track and field remains vulnerable to doping controversies despite efforts to clean up the sport.

Only this week, the IAAF was confronted with multiple drug-related headlines, with news of Russia potentially facing the threat of new sanctions while German TV channel ZDF broadcast revelations of doping by Kenyan athletes.

The IAAF has taken a hard line on Russia in the wake of the doping scandal which erupted in 2015-2016, this week voting to maintain the country’s four-year-old suspension from its competitions.

IAAF chief Sebastian Coe nevertheless painted a positive picture for the sport on the eve of the championships, citing the creation of the Athletics Integrity Unit as a step forward in the battle against doping.

“I genuinely am very pleased and proud of the way the sport has come together,” Coe told reporters.

Coe is now looking forward to a shift in emphasis for his second term, saying he plans to focus on how to grow the sport.

“It’s been a tough four years, the first two were the reforms — the second two years were really making sure they were implemented,” he said.

“I want the next four years to be the fun bit… I want the sport to grow.”