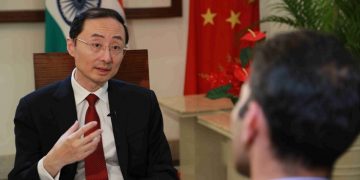 New Delhi, April 20: (Republic/SAM): After India amended its foreign direct investment policy to prevent the hostile takeover of stressed firms amid the COVID-19 pandemic via the automatic FDI route, China seemingly responding to India’s move said that it has done nothing but act as a ‘responsible country’ and has proven its international cooperation.

Chinese Ambassador to India Sun Weidong in a series of tweets said that China had been the first to alert the world regarding the pandemic and that it had helped become the ‘world’s factory’ by decreasing the strain on global medical supplies. He stated that at a time like this ‘cooperation’ was needed instead of ‘scapegoating’.

“As the first country to alert the world about the virus & to grapple with a serious outbreak, China served as a crucial line of defence for the world. Fighting off the virus with strength, ingenuity & sacrifice, China boosted global confidence in an ultimate victory,” tweeted Sun Weidong, the Chinese Ambassador to India quoting State Councilor and China’s Finance Minister Wang Yi.

“China has managed to restore its economy and society step by step to normal. The early economic reopening of “the world’s factory”, has significantly eased the strained global medical supplies. It will also help bring the world economy back to normal at an early date,” the ambassador added.

In massive development, the Centre on Saturday, amended the  Foreign Direct Investment (FDI) policy to ensure no hostile takeover of firms facing stress due to ongoing COVID-19 lockdown. According to the amendment, neighbouring countries – including China, Nepal, Bangladesh, Pakistan will require government approval for investing into Indian companies. Centre has also prohibited Pakistan from investing in Indian sectors of defence, space, atomic energy and sectors/activities prohibited for foreign investment.

Apart from India, EU, US, and Australia have checked Chinese FDI amid COVID-19 crisis. China’s People’s Development Bank had just last week picked up an over 1% stake in India’s largest private lender HDFC bank. But the new rule applies only to investments over 10% stake.