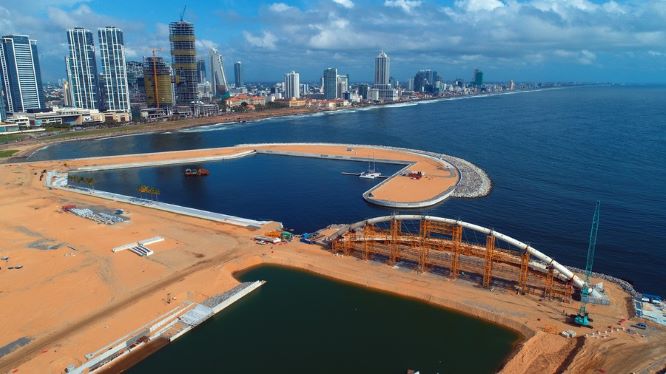 COLOMBO, Sri Lanka, November 28: —China is poised to start building a $13 billion city on Sri Lanka’s seafront, as the island nation located near some of the world’s most important shipping lanes deepens its ties with Beijing despite U.S. efforts to gain influence.

The Port City, which will be built on 660 acres of land reclaimed from the sea close to Colombo’s city center, had been delayed and debated under a previous government, as the country tried to decrease its dependence on China. Now the family of Mahinda Rajapaksa, who had earlier overseen a tightening of ties with China, has returned to power.

Once completed, Port City could become an important symbol of the power of Beijing’s Belt and Road Initiative, which seeks to spread Chinese influence across Asia and beyond by unleashing its financial and construction firepower.

Sri Lanka is trying to rebuild after a devastating civil war and the more recent combined economic fallout from terrorist attacks and Covid-19. It says that the U.S. is offering little financial support while seeking to dictate its foreign relations, a complaint played out across Asia.

“We turned to all our friends, including the World Bank and India,” said Palitha Kohona, Sri Lanka’s ambassador-designate to China. “The one entity that came to our assistance hastily was China.”

Sri Lanka is also taking new loans from Beijing, despite a visit from the U.S. Secretary of State Mike Pompeo last month, when he warned the nation of 22 million people against forging closer ties with China, which he called a predator. Washington says it wants to keep the Indian Ocean free and open from Chinese domination.

The Rajapaksas staged a political comeback during the past year. Mahinda Rajapaksa’s younger brother, Gotabaya Rajapaksa, was elected president in November 2019, while the elder brother was elected prime minister in August 2020, taking two-thirds of the seats in parliament. Authority is split between the two positions in Sri Lanka, though the president, who is head of state, is more powerful. Under the previous pro-Western government headed by Rajapaksa opponents, Sri Lanka had cooled toward China.

During the Rajapaksas’ first stint in power, between 2005 and 2015, they signed up for multiple Chinese infrastructure projects, including a Chinese-built port in their home constituency of Hambantota, and started the land reclamation for the Port City development in Colombo.

Washington has held up Sri Lanka as a prime example of what it calls China’s “debt trap diplomacy.” Hambantota was subsequently sold to China on lease in order for Sri Lanka to lower its debt burden. China denies its projects are created to entrap borrowers or spread its control of countries.

After meeting Mr. Pompeo in October, President Rajapaksa said that China had helped develop his country since the end of the civil war and reiterated that Sri Lanka wasn’t caught in a debt trap as a result.

The Rajapaksa government has rejected a proposed $480 million U.S. economic aid package and a military agreement because it says they came with too many conditions, such as mapping all state-owned land and providing immunity from prosecution for American military personnel in the country, which critics claimed impinged on Sri Lanka’s sovereignty.

“The international community will come to our assistance but with a demand for fiscal discipline and upholding the rule of law,” said Eran Wickramaratne, an opposition member of parliament and former deputy finance minister. “China will make no such demands but provide debt at a high cost.”

Last year, 43% of loans for major projects came from China, according to the Central Bank of Sri Lanka. Most of the country’s overall foreign debt is from international bonds, with around 10% owed to China.

Fitch Ratings downgraded Sri Lanka’s sovereign debt Friday, saying its debt would rise this fiscal year to 100% of gross domestic product, from 87% last year. The ratings company warned of increased risk created by the coronavirus economic shock, low foreign-exchange reserves and large debt payments due over the next few years. The Sri Lankan government called the downgrade “ill-informed,” saying it was made without “any evidence-based and objective analysis.”

The Rajapaksas say they are seeking equity investments for this round of projects, including for the Port City. China’s global initiative has up to now been marked by borrowings taken on by the host country. Government officials point out that the investments aren’t restricted to China.

The U.S. has pushed for tough economic overhauls in Sri Lanka to make the country more attractive for American private-sector investment.

“We would welcome investment from the United States. But that doesn’t mean we exclude anyone else who is keen to invest,” said Ajith Nivard Cabraal, state minister of money, capital markets and state enterprise reforms.

Sri Lanka is negotiating a $700 million loan from China, as well as a $1.5 billion currency swap facility, Mr. Cabraal said. Earlier this year, China provided a $500 million loan and a $90 million grant.

This month, the first factory for Hambantota was announced, a $300 million tire plant from a Chinese company, Shandong Haohua Tire. The authorities are hoping to attract more manufacturers to a 19-square mile industrial zone next to the port.

Among the other large projects that will be started or finished with Chinese backing is the $1 billion road from Colombo to the central city of Kandy and a $300 million coal-fired power plant in Norochcholai on the west coast.

The government is planning to introduce new legislation in parliament in January to make special laws for Port City. The move, it says, will provide smooth transactions and tax breaks to encourage investment and commerce from the new city.

China will run the Port City, which will have offices, apartment blocks and a marina, on a 99-year lease. It is envisaged as a financial services and technology hub, in contrast to the industrial zones being created by China for its factories in other countries.

Luo Chong, spokesman for the Chinese embassy in Colombo, said that after August elections, which put the Rajapaksas solidly back in control of the country, China “can now go for megaprojects.”

He said that work on a $1 billion international financial-center complex for the Port City, built by a Chinese company as an investment—not a loan—could begin in early 2021.

-Asiri Fernando contributed to this article.