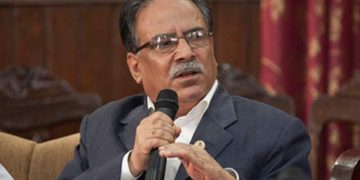 With Dahal’s election, Nepal gets its 23 rd Prime Minister in 26 years

With Dahal’s election, Nepal gets its 23 rd Prime Minister in 26 years Parliament Speaker Onsari Gharti Magar announced that Dahal was elected Prime Minister as he had the support of more than 50 per cent of current strength of the House. 573 lawmakers cast their votes of whom 363 were for Dahal.

Dahal was backed by the largest party in the House, the Nepali Congress; constituents of the United Democratic Madhesi Front and the Federal Alliance; and some other fringe parties. 210 lawmakers including those of CPN-United Marxist Leninist and Rastriya Prajatantra Party-Nepal, had cast votes against the Maoist leader.

Nepal appears to be the most politically unstable country in the South Asian region if one goes by the number of Prime Ministers it has had in the last 26 years. There have been 22 PMs between 1990 and 2016. On an average, Nepalese Prime Ministers have been in office only for 34 months.

Koirala was followed by Man Mohan Adhikari of the Communist Party of Nepal (United Marxist Leninist). This first radical communist PM lasted in office for 286 days from November 30, 1994 to September 12, 1995. Power swung back to the grand old party, the Nepali Congress, when  Adhikari was replaced by Sher Bahadur Deuba, who was PM for 547 days from September 12, 1995 to March 12, 1997.

Power went into the hands of the Rashtriya Prajatantra Party (RPP) when Lokendra Bahadur Chand became PM on March 12, 1997. He had served for 209  days when he demitted on October 7,1997. But Chand was replaced, not by a PM from another party, but his own RPP. Successor  Surya Bahadur Thapa was in office for 190 days from October 7, 1997 to April 15, 1998.

During Koirala’s rule, Nepal got a constitution which turned the Himalayan Kingdom into the Federal Democratic Republic of Nepal. But Koirala continued to be PM and served for 83 days from May 28, 2008 to August 18, 2008.

In the meanwhile a new political force had arisen in Nepal, the United Communist Party of Nepal (Maoist) led by the an underground leader Pushpa Kamal Dahal, alias “Prachanda”. Prachanda became PM on August 18, 2008 and left office after 280  days on May 25, 2009. When Prachanda quit, Madhav Kumar Nepal of the CPN (United Marxist Leninist) became PM. The radical, but non-Moist PM, was in office for 622 days from May 25, 2009 to February 6, 2011.

Madhav Kumar Nepal’s quitting office did not change the political color of the government because his successor, Jhala Nath Khanal, was also from the CPN (ML). Khanal administered the country for 204 days from February 6, 2011 to August 29, 2011. Siginifying the continued hold of the CPN (ML) on the country,  Khanal was succeeded by fellow party man Baburam Bhattarai. Bhattarai was in office from 563 days from August 29 , 2011 to March 14, 2013.

Nepal went back to the Communists once again when Khadga Prasad Sharma Oli of the CPN (ML) became PM on October 12 ,2015. But Oli alienated the depressed classes called the Janjatis. He also alienated the Madesis (people of Indian origin) by his efforts to redraw the boundaries of districts which divided the Madesis. Oli’s  lurch toward China incurred the wrath of India too. A ombination of factors led to his resignation on July 24, 2016.

His successor is the Maoist leader Pushpa Kamal Dahal, who now has the widest range of support. But because of an agreement with the NC, Dahal will quit office in nine months handing over power to the NC leader, Sher Bahadur Deuba.