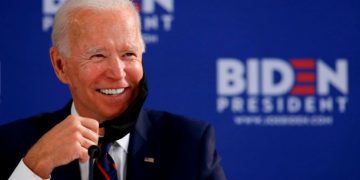 The past indicates problems for the new President Joe Biden, says Prof. Adam Tooze in The Guardian Writing in The Guardian on November 25, Columbia University History Professor, Adam Tooze, says that though President Donald Trump’s efforts to overturn the outcome of the 3 November election have failed, there is a silver lining for his Republican colleagues. For them, the “fight goes on”.

Biden defeated Trump, but in that same election the Democrats failed to gain the majority of seats that the new President needs to actually put an end to the era of Republican dominance, Tooze points out. Things might still go right in Georgia, but that would leave the Senate hanging by a thread.

Four times, at moments of historic crisis, the US electorate has handed the White House to a Democrat – 1916, 1932, 2008 and 2020, Prof.Tooze recalls in the article entitled:  “Biden will have the Presidency. But Republicans still have the power.” Who controls depends on fickle and often trivial whims of local political circumstance and on the infighting between the divided branches of US government, he points out.

“America’s rise to global power occurred in a crucial 20-year period between 1932 and 1952 in which, except for a brief two-year hiatus, the Democratic party controlled both the White House and Congress. That dominance defined a new image of the US as a driver of global progress, but that external face was founded at home on an incongruous coalition in which the “solid South” provided the necessary votes in Congress. Jim Crow segregation was the price. The Democrats remained the dominant power in Congress through the early 1990s, but there was never to be another period quite like the mid-century decades.”

The US can be governed even when Washington is at odds. Indeed, a divided US can preside over historic global shifts. After losing control of Congress in 1986, the Republican administrations of Ronald Reagan and George HW Bush oversaw the end of the cold war with Democrats in control of both House and Senate. But theirs was the easy task of deciding how best to profit from the collapse of the Soviet Union. There was little cause for partisan wrangling, Prof. Tooze says.

In 1919, a Republican Congress spurned the League of Nations, promoted by the Democratic President Woodrow Wilson. Eighty years later, their heirs would deny Bill Clinton and Al Gore the ratification of the Kyoto climate protocol.

“It is telling that the leading appointment in climate diplomacy that the Biden team has so far made is a state department lawyer, Sue Biniaz, who is best known for her role in crafting the Paris agreement of 2015 so that it did not require Senate approval, where it would surely have failed. When Biden returns the US to the Paris agreement, he will do so without Senate ratification. It will be a matter of presidential decree, valid no further than 2024.”

For the last quarter-century, the Republicans have proven intransigent on climate. In other moments it has been possible to bridge such divides with a unifying ideology. In 1946, Harry Truman lost control of Congress in a rightwing landslide that among others brought Joe McCarthy into Congress as Senator from Wisconsin. That put paid to any hope of implementing Truman’s Fair Deal, the successor to the New Deal that might have given the US a welfare state to compare with that of postwar Britain. It is a defeat that has marked America ever since.

Nevertheless, in 1948 the Truman administration won overwhelming congressional support for the Marshall plan. Anti-communism provided a bipartisan ideological motivation if not for social reform at home, then for unprecedentedly dramatic action abroad. As a result, Europe was spared the disastrous abandonment by the US that followed the First World War, Prof. Tooze points out.

“The cold war unified an otherwise divided US polity. An external threat, imagined or real, can do that. In 2001, after the election that was gifted to him by the supreme court, George W Bush faced a hostile Democratic Senate. But September 11 and the “war on terror” solidified the home front. That unity collapsed amid the disastrous wars in Afghanistan and Iraq.”

“But though criticism of US overreach is now widespread, no new foreign policy synthesis has emerged. The Barack Obama Presidency lacked a unifying concept that linked domestic and foreign policy. A toxic Sinophobia blended with a domestic culture war – a kind of neo-McCarthyism – did emerge in the last months of the Trump presidency. The ravings of the Trump campaign lawyers echo that overheated mood. That version is offputting to a majority of Americans. But the anti-Chinese posture is not.”

Rather than a fundamental rethink of the purposes of US power, the most attractive option for a vocal segment of opinion in both parties is to orientate both US foreign policy and domestic reform around antagonism towards China, Tooze says. There is no doubt that China’s rise is a world-historic shift. But if confrontation with Beijing is the basis on which the Biden administration seeks to cooperate with the Republicans, the result will be a 21st Century cold war.

“As a democracy, America’s constitution is always up for grabs. But push that too far and you easily tip not just into identity crisis, but profound dysfunction. The politicking over the supreme court is a case in point. Of even more immediate relevance is the handling of the ongoing economic crisis. There is a serious risk of further deterioration this winter. But with an eye to the Georgia Senate races, the GOP is resisting any concession to the stimulus plans of the Democrats,” Tooze notes.

He further says: “Trump’s Treasury Secretary, Steven Mnuchin, has made sure that funds already allocated to the Federal Reserve will not be available for stimulus by an incoming Biden presidency. Over the protests of the Fed, Mnuchin demanded the return of hundreds of billions of funding approved in March. In the words of no lesser authority than the Chamber of Commerce, the leading business lobby in the US, Mnuchin’s demands on the Fed “prematurely and unnecessarily tie the hands of the incoming administration” and close the “door on important liquidity options for businesses at a time when they need them most”. For fear of sliding into a double-dip recession, in the Biden camp the pressure is mounting to accept any deal that Mitch McConnell, as leader of the Senate, will agree too.”

“How can we locate our current impasse in historical terms? On the one hand, the mid-century moment of Democratic party dominance still hangs over the progressive understanding of modern US history. On the other hand, Wilson’s shipwreck, when the Republicans said no to what was then the most important peace treaty in modern history, illustrates what happens if you dare too much with too little support. As veterans of the Obama era, Biden’s team know that in 2009 and 2010, when the Democrats did still control Congress, they might have dared more.”

“The risk is that Biden’s presidency is stillborn. It will be the Republicans who call the shots. This is what America voted for”, Prof.Tooze concludes.