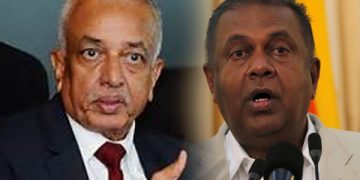 Colombo, March 5: A last ditch effort by two top leaders of the United National Party (UNP) to prevent a split in it is likely to succeed, sources in the party said on Thursday.

The unity plan, pursued with single-minded devotion by Malik Samarawickrama and Mangala Samaraweera, is to secure an agreement to appoint as UNP General Secretary a person who is acceptable to both the Ranil Wickremesinghe faction and the Sajith Premadasa faction- that is- it to the official UNP led by Ranil and the rebel outfit Samagi Jana Balawegaya (SJB) led by Sajith.

Since the present UNP General Secretary, Akila Viraj Karaiyawasam, is considered to be too close to Ranil, the Sajith  faction (SJB) has been wanting him out. But Ranil would not sacrifice him.

However, thanks to the efforts of go-betweens Mangala Samaraweera and Malik Samarawickrama, Akila Viraj Kariyawasam has offered to resign to pave the way for the appointment of another more widely acceptable person.

Malik and Mangala are trying to find out if Kabir Hashim would be acceptable to both factions. Alternatively, either Malik or Mangala could be appointed. Both Malik and Mangala are close to Wickremesinghe though both supported the candidature of Premadasa in the run up to the November 2019 Presidential election against the wishes of Ranil. Electoral compulsions had pushed them to pitch for Sajith and ditch Ranil.

The Ranil and Sajith factions will go into a huddle to resolve the General Secretary issue.

If the issue is resolved as expected, the UNP will remain one party and the April 25 parliamentary elections will be fought on the basis of a united UNP leading the SJB 12-party alliance.

The united UNP-led SJB will do better than initially expected. But still it will not be able to capture power. As an UNP insider put it, the UNP, irrespective of factional variations, is still to erase the impression that it is a non-perfomer having done little in the four and a half years it was in power (from 2015 to 2019). It failed on the economic as well as the national security front.

Sajith is also too closely identified with the minority Tamils and Muslims who, according to the Sinhala-Buddhist majority, are asking for too much. The April 21, 2019 suicide bombings by Islamic fanatics have created a wide rift between the Sinhalese and Muslims.

However, the ruling Sri Lanka Podujana Peramuna (SLPP) also has developed warts. After coming to power in November 2019, President Gotabaya Rajapaksa has not performed as well as expected. An anti-incumbency factor has already come into play.

To quote the UNP source again: “After the tax cuts, people expected goods, especially consumer goods, to get cheaper. But prices did not come down. Salary increases promised to the 1.5 million state employees have not been given yet. Thousands of government employees appointed by the previous government on an ad hoc basis (as a sop), were sacked as the government had no money to pay them. The government is saddled with huge foreign loans forcing Prime Minister Mahinda Rajapaksa to seek a three-year moratorium on loans repayment. Employment generation and trade are affected because government is not spending on projects. Government has no money in its coffers to spend.”

But the SLPP is sure to win because the Sinhala-majority still has faith in the Rajapaksas. However, it is not expecting to get a two thirds majority as it originally fancied. Former State Minister Lakshman Yapa Abeywardena told the media, that the SLPP plans to invite other parties to join the government after the elections “to get a two thirds majority”. Some from the UNP could crossover, he said, but added that “racist” and religious parties and those which bargain for this or that will not be welcome.

(The picture at the top shows Malik Samarawickrama and Mangala Samaraweera)