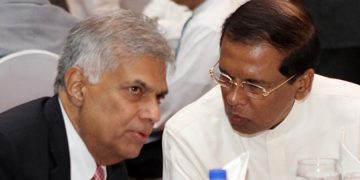 Will Sirisena assert himself or be a lame duck President?

Will Sirisena assert himself or be a lame duck President? Colombo, January 19: Sri Lankan President Maithripala Sirisena’s emotional outburst and the subsequent storming out of the Cabinet meeting earlier in the week, infuriated by public criticism against him by Members of Parliament from the United National Party (UNP), was a glaring demonstration of the increasingly heightened political conflict between the two main partners of the National Unity Government.

This was perhaps the first time an Executive President of Sri Lanka, presiding over the government’s Cabinet, has walked out of the meeting in protest.

Subsequent reports revealed that President Sirisena had singled out several UNP MPs, named them and censured them for criticizing him unfairly, before declaring that a country could not be ruled under such circumstances.

He had said that he was being attacked because some UNP MPs thought that the Presidential Commission of Inquiry into the Bond Issued by the Central Bank of Sri Lanka had been set up by him in order to target their party, while in fact he was only going after the corrupt.

The President had remarked that it was better for members of the Cabinet to decide whether the country should be governed this way the MPs seemed to want. Saying this, he stormed out.

Reports said Prime Minister Ranil Wickremesinghe and several senior ministers from both the main parties in the cabinet visited him later and persuaded him to come back and chair the Cabinet meeting.

It is significant that this incident took place in the immediate aftermath of the Supreme Court’s determination that President Sirisena’s official term is five years and will end on January 9, 2020. This determination was in response to the President’s seeking the Supreme Court’s opinion on whether he could serve up to six years.  This, according to a statement from the Presidential Secretariat, was because President wanted to clear the ambiguity regarding his term of office as differing opinions were expressed on the issue.

The unanimous determination of the five judges of the Supreme Court, led to several political observers speculating about a possible scenario of Sirisena’s becoming a lame duck ruler unable to assert himself politically.

It is interesting that the Supreme Court’s determination completely rejects the interpretation of the Attorney General, who maintained that since President Sirisena was elected and assumed office before the passage of 19th Amendment to the Constitution, he can therefore serve a 6-year term as previously. According to his argument Sirisena’s term doesn’t end until January 9, 2021.

The President’s decision to ‘clear the ambiguity’ as his office claims, compels one to revisit the promises he made to the nation from the Independence Square in Colombo,  immediately after being sworn in on January 9, 2015. He pledged to do away with the Executive Presidency, and not to contest another Presidential election. His avowal was viewed as an honest demonstration of his determination to abolish the Executive Presidency. But his recent actions, especially his studious silence in the face of ministers from his party continuously talking about the possibility of fielding him as the party’s presidential candidate in the next election, makes one rethink about his pledge and question his sincerity.

On Tuesday (16), the State Minister of Finance, Lakshman Yapa Abeywardena, said President Sirisena would definitely contest the next presidential election if the constitution remains unchanged and the Executive Presidency remains intact. There was no rebuttal from Sirisena. So, what emerges as ambiguous now is, whether he will retire from office after two years when his current term ends or contest the 2020 Presidential election as the candidate of the Sri Lanka Freedom Party (SLFP) or the United People’s Freedom Alliance (UPFA).

This also gives rise to another question. Will Sirisena be able to abolish the Executive Ppresidency in the remaining two years through constitutional reforms?

Of course, Sirisena has refuted criticism about him in regard to seeking the opinion of the Supreme Court about his term. He has also said that he did not come to stay in power forever and that he is ready to leave any time.

This of course brings up a critical question about his political future should he honour the promise he made three years ago and not contest another presidential election. Reneging on a pledge and willingly getting into the fray would certainly damage his political credibility.

In this context, one wonders how long his party, particularly the ministers and MPs who are always interested in enjoying power and privileges, will remain loyal to him,  knowing he would leave the office in two years.

The issue becomes significant given the SLFP’s internal divisions. There is one faction which is participating in the National Unity government and being led by Sirisena and the other calling itself the Joint Opposition, is outside and led by former President Mahinda Rajapaksa. These two are at constant loggerheads.

As there is no alternative leader who is nationally acceptable to take up the mantle of the leadership of the SLFP, his partymen will naturally flock towards the Rajapaksa brothers for leadership.

It is a given that the politicians who are now with the President will desert him if he is not going to be in electoral politics any more,  as they need to ensure a political future for themselves.

Even now, when President Sirisena is the leader of  the SLFP officially,  a majority of the party’s  MPs are supporting Rajapaksa and campaigning for candidates contesting the February local Polls under the banner of the Sri Lanka Podujana Peramuna. (SLPP). He SLPP is the party regarded by Rajapaksas as their future political vehicle in the event they fail to recapture SLFP’s leadership.

As far as the UNP is concerned, only the really naive would think the party is sincerely interested in continuing political co- habitation with the SLFP.

The subsequent course of actions taken by the President on the report of the Bond Commission and the outcome of the local government elections will decide the relationship between the two main partners of the unity government.

No doubt the UNP is devising a strategy to face and win the 2020 elections on its own rather than going out of the way to show interest in maintaining the coalition government.

A clear and visible alienation of the main partners in the Unity Government will place President Sirisena in a politically vulnerable position. He cannot afford to break ranks with the UNP at present, because if he does so, he will certainly face many a problem in safeguarding his leadership of SLFP, whose leaders, being used to power, would not hesitate to leave him in the lurch if his ‘lame duck’ status deprives them of their ministerial positions.

So, the President will have to spend the next two years as an executive who is unable to assert himself politically. He is on the horns of a dilemma. Is he astute and shrewd enough to ward off a situation in which he is a mere lame duck President?