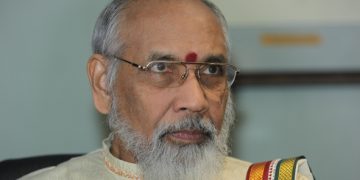 “It is time you granted self-government to the North and East and allow us and our Diaspora to help you and us economically. Let us together move this Country towards peace and prosperity!” the Jaffna MP said in his budget speech. Colombo, November 19 (newsin.asia): The Jaffna District MP  and former Chief Minister of Sri Lanka’s Northern Province C.V.Wigneswaran has criticized the  Rajapaksa government for increasing the defense budget by 16% for the year 2021.

Speaking in the budget debate here on Thursday, Wigneawaran said: “A systematic review of Sri Lanka’s post war defense budget reveals that Sri Lanka spends too much on defense and the defense budget is spent inefficiently. I wonder if the Auditor General has supervisory control over the spending.”

“War is over but our Defense expenses are going up higher and higher. Why? Is the Government expecting another war, if so with whom? The Tamils or the Indians or the Western Countries?  Whom is our government afraid of? Why are we arranging for wartime security needs rather than post-war security needs?”

“My suggestion is if less money is spent on the Defense budget more money could be allocated to pay off debts, thereby ensuring more macroeconomic stability.”

“Are you not cutting your nose to spite your face? Are you not clothing yourself with armaments, artillery, armour and infantry in the land domain and logistics in the maritime domain because you are suspicious of sections of your own citizenry who had been reacting to your prejudicial discriminatory unilateral activities of the past?”

“As Buddhists don’t any of you realize that you are traversing on a karmic suicidal path? Buddhism says our actions today fashions our life tomorrow. If we think outside the box, so to say, today, and act accordingly our path tomorrow might lead us to prosperity and contentment.”

“Let me put my suggestion straight. The Sinhalese are getting to be in readiness for war because you suspect the Tamils. Is it not suspicion, fear and hatred that drives you to arm yourself so lavishly with newer and newer armaments at great cost?  As a result have we not swelled up our National Debt? A Debt prejudicial to you and us!”

“Why don’t you think of mending your fences with the Tamil speaking and obtain the goodwill of lakhs and lakhs of Tamils driven away by you and living abroad? What stands between reconciliation and prosperity on the one hand and you on the other hand is the hesitancy by you to take the correct decision. The decision that would reconcile all ethnic groups in this Island.”

“It was King Ashoka who realized the futility of war, violence and vindictiveness. On realization he changed course. The time has come for a change of course in Sri Lankan history. With two thirds majority in Parliament you could bring peace, reconciliation and prosperity or death, damage and destruction. The choice is yours!”

“Acknowledge you have committed immense wrongs to the Tamil Community and try to mend your differences with us. All we want is the right to look after ourselves in our traditional areas and govern it the way we want. That is not separation. That is devolution. That gives meaning to the theory of subsidiarity. According to this theory political decisions must be taken at a local level rather than by a Central authority. We do not want outsiders to expropriate our assets and resources. We do not want our lands to be grabbed away anymore by outsiders. We want to govern our areas in accordance with our traditions and conventions.”

“We want to do our fishing by ourselves in our traditional areas. We contributed up to 43 percent of the fish needed by this Country in 1983. Now our fishermen are constricted and curtailed from going out into the sea by the Navy as well as fishermen from elsewhere.”

“The government must therefore focus more on the North and East which lack behind the other Provinces in terms of development due to the war that lasted for nearly 30 years.”

“The need of the hour therefore is a change of heart among the powers that be among the Sinhalese. A change of heart on your part would have immense pleasant consequences. You must take us into your confidence. Today’s position as far as the Tamil speaking are concerned is pathetic. After 11 years since the war ended war affected Provinces still lay behind the rest of the country economically. So it is time you granted self-government to the North and East and allow us and our diaspora to help you and us economically. Let us together move this Country towards peace and prosperity!”