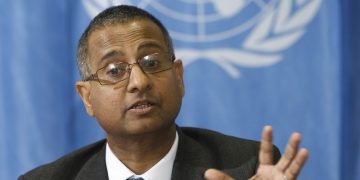 The answers are already in WHO’s guidelines, points out Shivanthi Ranasinghe Last week the UN Special Rapporteur on Freedom of Religion or Belief Ahmad Shaheed wrote to Sri Lankan President Gotabaya Rajapaksa to emphasize  the importance of upholding the right of freedom of religion or belief as well as the rights of the minorities even during this challenging time. His concern was precipitated by the decision of the Ministry of Health (MoH) to cremate all who had succumbed to the COVID-19 virus, including those who were suspected to have been compromised.

The letter exemplifies the failure of the UN to honor its mandates.

People in countries like Sri Lanka often mistake the UN as an apex body that has overriding rights over sovereign countries.  This is inadmissible. The UN is simply an assembly of member States to present their issues at a global forum that is essentially made of sovereign states.  After all, the UN was formed after the World War II with the clear objective to ensure that relationships between countries do not deteriorate to warrant a similar catastrophe.

Therefore, UN officials prying on internal matters of a country and worse, dictating terms to governments, is an antithesis of its mandate.

It certainly does not help when, as illustrated by Shaheed’s letter, UN officials react after jumping to erroneous conclusions based on ill-founded information. Shaheed is under the misunderstanding that the Sri Lankan government is discriminating against Muslims by not allowing them their final rites. He has come to the ridiculous conclusion that the MoH has decided on cremation arbitrarily. He has hinted that this decision could perhaps be due to a “racist” agenda.

He has completely missed that final rites are denied not only for Muslim COVID-19 victims, but all victims of the virus. Sinhala Buddhists are the majority in Sri Lanka and yet, they too have been denied paansakulaya which is just an issue for Buddhists as cremation is for Muslims or for that matter Catholics. Yet, these communities are not at this point prioritizing religion when the issue is a national medical emergency.

In his letter Shaheed writes: “We are concerned that the amendment is inconsistent with the infection prevention & control for the safe management of a dead body in the context of COVID-19 guideline provided by the WHO. Furthermore, we are concerned about the lack of consideration provided and the lack of sensitivity in the MoH guidelines to differentiate communities and their religious and cultural practices. The legitimacy for such amendments should be based on the principles of legality, necessity, proportionately and non-discrimination.”

Shaheed extensively quotes the WHO guidelines as if any opinion outside these guidelines would be heratic. On this basis, he had questioned a Head of a sovereign nation, with the clear expectation of a prompt response. This Head, however, may not respond because he has bigger concerns than correcting a mere UN official who has failed to do his homework.

It was not by accident that in the Global Response to Infectious Diseases index, Sri Lanka and President Gotabaya Rajapaksa have been ranked ninth. This is an index to measure the leadership given to preparing the country to deal with COVID-19. It is noteworthy that this particular Head foresaw the dangers of COVID-19 as early as January 03, 2020. On the other hand, WHO was too busy ensuring  self-preservation.

It was only on March 11 that finally WHO plucked the courage to change the warning from “a public health emergency of international concern” to a “pandemic”. By this time, more than 118,000 people were infected in 114 countries, and 4,291 had succumbed to the virus.

This delay to warn the world of the pandemic is costing many countries. They were not ready for the highly infectious disease or for the possibility of its widespread community transmission. Therefore, their travel policies were not amended on time, nor were cities or countries ready with quarantine facilities and for social and economic disruptions.

Most countries, including those with highly advanced healthcare systems, were woefully under-prepared with adequate medical and healthcare facilities. Many patients die today simply because the capacities in these countries are overwhelmed.

Thousands are dying daily and WHO, a body of the UN, cannot absolve itself fully from culpability. Amidst this chaos, a UN official is focusing his energy on just three victims and calling for explanations from the President of a sovereign nation.

When studying the WHO guidelines, it is clear that WHO does not make a presumption to be all-knowing. In fact, WHO is very candid that it does not have enough information to offer concrete advise to nations. Hence the “guidelines” and not  “regulations.”

COVID-19 is a new virus and a new experience to the world. WHO is also still learning about this virus. Almost daily, our understanding of it is being challenged. We do not even know whether the virus itself is evolving making our current knowledge of it obsolete or whether we had underestimated its capabilities in the first place.

However, WHO stops short of assuring that the virus will not be transmitted by dead bodies. Instead, WHO simply observed that “to date, there is no evidence of persons having become infected from exposure to the bodies of persons who died from COVID-19”. WHO was correct to be reserved in its opinion for a case has recently emerged from Thailand of a care worker succumbing to the virus after getting infected from a corpse.

Shaheed who is extensively quoting WHO guidelines, seems to have missed the warning WHO had issued with the guidelines. WHO clearly states that as “this is a new virus whose source and disease progression are not yet entirely clear, more precautions may be used until further information becomes available.”

At the very least, Shaheed had not even bothered to support his presumption that Muslims are being discriminated with parallel evidence. He ought to have checked if Muslims were discriminated in treatment or denied facilities available to others. If Muslims are not maltreated while living, and same efforts are made to save them as the next patient, what is the objective of discriminating them in death needs to be answered.

In his letter Shaheed is advising President Gotabaya that “when cultural or religious sensitivities are involved, an inclusive and participatory dialogue or consultation with relevant stakeholders, including the civil society and different ethnic or religious communities must be conducted before a decision is taken”.

To strengthen his case, he notes that WHO guidelines “clearly outlined that one of the key considerations is to avoid hasty disposal.”

Yet, WHO Regional Director for Europe Dr Hans Henri P Kluge, notes on March 12 that “we have to humbly acknowledge that COVID-19 is a fast evolving situation. We may not always have the best evidence at hand on which to base our decisions, but we do not have the luxury of time to wait until better evidence becomes available….. if we all pull together and recognize that this is a time to put health first, above all other considerations, we can overcome this difficult and challenging moment.”

President Gotabaya need not respond to Saheed because WHO itself, through Dr Kluge’s statement, has already done so.

(The picture at the top shows Ahmed Shaheed, the UN Special Rapporteur on Freedom of Religion or Belief)