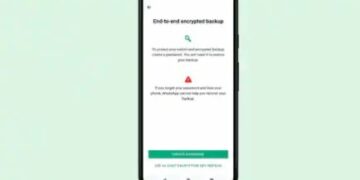 by Editor
in Around The World, Tech, World
Reading Time: 3 mins read
10 0 WhatsApp had temporarily enabled the feature on WhatsApp beta for Android 2.21.15.5 update (WhatsApp)

This feature will enable an optional extra layer of protection to their iCloud and Google Drive accounts if users want it. “In rolling this out, we have completed the final step in providing a full end-to-end encrypted messaging experience,” the Facebook-owned popular messaging application stated.

“You can now secure your end-to-end encrypted backup with either a password of your choice or a 64-digit encryption key that only you know. Neither WhatsApp nor your backup service provider will be able to read your backups or access the key required to unlock it,” it further said.

-Tap Done, and wait for WhatsApp to prepare your end-to-end encrypted backup. You might need to connect to a power source.

READ: Don’t fall for this simple trick to get your WhatsApp hacked

How to turn off end-to-end encrypted backup:

-Confirm you want to turn off encrypted backup by tapping Turn Off.

This new feature will enable end-to-end encrypted backups, be it from sending and transit, to receiving and storing in the cloud.

“This feature will provide people with more privacy and security for their digital conversations and that’s a responsibility that we don’t take lightly. Given this, we are rolling this out slowly to ensure a consistent and reliable user experience for people on iOS and Android around the world,” the company added.

WhatsApp had temporarily enabled the feature on WhatsApp beta for Android 2.21.15.5 update to protect backups while on Google Drive from unauthorised access. It was disabled later in the 2.21.15.7 beta update for Android users. It was enabled once again, first on iOS this time and later on Android.