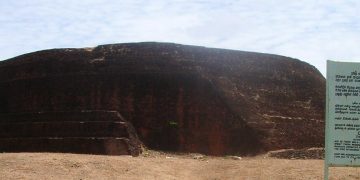 Elala Sohona or Dakshina Stupa is touted as Elala's tomb

Colombo, July 23: What is touted as the tomb of the Sri Lankan Tamil King Elara  in Anuradhapura district, is actually a fable, says noted historian, Prof. S.Pathmanathan.

“There is no evidence of Elara’s tomb anywhere. If the massive pile of burnt bricks near Anuradhapura is being touted as Elara’s tomb, it is because nobody is able to read the inscription on it, which is in the Tamil Brahmi script,” Prof.Pathmanathan told The New Indian Express.

The Nagas, who were animists, had, over time, converted either to Hinduism or Buddhism, and constructed shrines dedicated to these religions. Many of these shrines would carry an inscription saying “Mani Nagan” in the Tamil  Brahmi script to indicate that the structure was built by a Naga king, Prof.Pathmanathan said.

The structure in question is popularly known as Elara Sohona (Elara’s Tomb). But this cannot be his tomb because Elara ruled the Anuradhapura area in 2 nd.Century BC (205 to 161 BC) and the Nagas, who built the structure, ruled  Anuradhapura in 2 nd.Cenury AD, Prof. Pathmanathan said.

Be that as it may, the site of the “tomb” is  associated with Elara’s death at the hands of the Sinhalese king Dutugamunu and had been a sacred place till the advent of the British in the 19 th.Century, says Dr.James T.Rutnam.

The Tamil king of Chola origin from Tamil Nadu, was seen as a just ruler by everybody including his slayer, Dutugamunu ,who had ordered people to dismount, and silently pay homage to him.

“It is agreed that mistakes had been made in the identification of some of the ruins of Anuradhapura. But traditionally it was well-known that there was one spot over all others where kings and commoners had been enjoined that they should not pass without paying due respect and veneration. It was a continuing injunction that had been handed down from mouth to mouth, from generation to generation, and the chance of making a mistake is impossible.”

“At the beginning of the nineteenth century, when Pilima Talawa was fleeing from his enemies he is reported to have insisted at Anuradhapura, on observing this age-old rite and custom,” Dr. Rutnam wrote.

Speaking in the Sri Lankan parliament on Friday, Tamil politician Douglas Devananda asked the government to trace and protect the tomb of the Tamil king Elara just as it is trying to recreate the “palace” of the Sinhalese king Dutugamanu, who killed Elara in a sustained campaign to unify the island under “Sinhala” rule.

Devananda argued that it will be wrong to portray the Dutugamunu-Elara conflict as a Sinhala-Tamil war, and that it was only a fight to seize or retain control over Anuradhapura.

Prof. Pathmanathan supported Devananda’s assertion that the Dutugamunu-Elara fight was not an inter-ethnic one.

“The Mahavamsa, which is the main source of information on the exploits of Dutugamunu, does not identify him as a Sinhala,” Prof.Pathmanathan points out.

It is to be noted that the Mahawamsa, which has eleven chapters on Dutugamunu, was written in 5 th.Century AD, when, as pointed out by historian Wilhelm Geiger and Senarat Paranavithana, the “Sinhala identity” was being established.

Devananda’s demand for tracing and preserving Elara’s tomb, though made in parliament, did not elicit any response from the government.

Tamil historians are not surprised. They doubt if the idea will be pursued because the victory of Dutugamunu over Elara is popularly portrayed as the victory of the majority Sinhalese over usurping Tamils from outside the island. Elara was a Chola prince from India who had usurped Anuradhapura.

Such ethno-centric triumphalism is rampant, despite the Mahawansa’s saying that Elara was a just ruler. The chronicle, written in Pali, also says that Dutugamunu was very much aware of the sterling qualities of Elara. He built a tomb or a mausoleum to mark the place where the Tamil king was killed and asked people to pay homage to him by dismounting and observing silence while passing by the mausoleum.

Devananda referred to this instruction and said that the process of ethnic reconciliation will be carried forward if government, in addition to recreating the palace in which Dutugamunu lived for ten years, also traces Elara’s tomb and takes steps to preserve it.

However, Tamil historians and archeologists are not hopeful that this will be done. According to Prof.Pathmanathan, history and archaeology in Sri Lanka is  inextricably entangled in the over-arching Sinhalese-Tamil conflict.