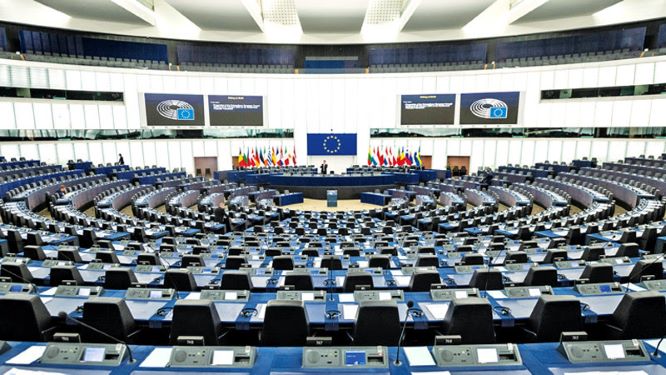 Colombo, June 21: The European parliament, on June 10, passed a resolution strongly criticizing Sri Lanka for its human rights record. Among other things, it sought the jettisoning of the Prevention of Terrorism Act (PTA) and advocated a temporarily withdrawal of the EU GSP-Plus tariff waivers “to push for advancement on Sri Lanka’s human rights obligations.”

It also expressed concern over China’s “interference” in Sri Lanka.

The recommendation on the PTA and the GSP-Plus will put Sri Lanka in a tight spot at a time when it is battling against odds on the security front as well as the economic front. It is under political pressure to figure out who actually masterminded the dreadful 2019 serial bombings. It is struggling to contain the COVID 19 virus, a severe foreign exchange shortage, loss of income from tourism and a fall in exports due to the pandemic.

The EU resolution draws attention to abuses under the PTA, which enables prolonged and arbitrary detention as well as torture. The government is accused of using the PTA to target members of minority communities and civil society. The resolution specifically mentions the detention of lawyer Hejaaz Hizbullah, and poet Ahnaf Jazeem. The resolution denounced Colombo’s failure to set up human rights accountability mechanisms. It points out that several military men implicated in “serious” rights abuses have been appointed to key government posts. It said Sri Lanka is on an “alarming path towards the recurrence of grave human rights violations.”

Surprising the Lankan government responded in a subdued manner, expressing only regret about being misinterpreted. It claimed progress on all rights issues, even as it categorically rejected the demand to scrap the PTA citing the 2019 multiple terror strike as its latest raison d’etre.  Without directly pleading for the retention of the GSP Plus tariff waivers, it pointed out how the concessions have “contributed significantly” to enhancing Sri Lanka’s “human capital”, and enabled it to meet the EU’s own demand for “ethical products.”. Foreign Minister Dinesh Gunawardena said that European parliament members would be invited to visit Sri Lanka.

The government is clearly aware of the consequences of openly defying the EU given the fact that the EU accounts for 38% of its overseas market and which it is able to enter without paying duty on a variety of products, particularly garments, under the GSP Plus scheme.

The EU withdrew the GSP Plus from Sri Lanka in 2010 citing human rights issues but it was restored in 2017 following assurances by the then pro-West government in Colombo. In 2018, the Export Development Board (EDB) said that between 2010 and 2017, Lanka’s apparel exports fell behind competitors Vietnam, Pakistan and Cambodia. These countries had trailed Lanka in 2009, with exports to EU at US$ 2.1 billion, US$ 1.5 billion and US$ 1.09 billion respectively, against Lanka’s US$ 2.3 billion. But by 2015, Vietnam’s apparel exports to the EU had risen to US$ 3.9 billion, Pakistan’s to US$ 2.9 billion and Cambodia’s to US$ 3.7 billion, with Sri Lanka trailing at US$ 2.4 billion. Lanka had lost duty waivers from 9.6% to zero in the apparel sector; from 18.5% to zero in the seafood sector, 12.5% to zero in the fresh and processed fruits and vegetable sector.

However, a year after the restoration of EU GSP in 2017, exports to the EU were up by 11%. Lanka’s export earnings touched US$ 15.1 billion, the highest ever. 2017 was also a record year for foreign investment with FDI inflows touching a record US$ 1.9 billion. The EDB pointed out that exports were a dire necessity for Lanka given the fact that its domestic market is minuscule. Hence the importance of retaining GSP Plus facilties.

But to retain GSP Plus, maintenance of high human rights standards is a sine qua non a fact regimes in Colombo have brushed under the carpet.  Writing in The Bar Association Law Journal in 2016, Gehan Goonetilleke pointed out that Lanka has been remiss in ‘effective implementation’ the 27 core international human rights conventions it had pledged to uphold when it applied for the GSP Plus in 2005.

The right of access to legal counsel is fundamental and the State is obliged to facilitate it. No one can be held incommunicado. However, in many cases, access to lawyers is denied and persons are held incommunicado. Torture is widely practiced. Goonetilleke quotes the Human Rights Commission of Sri Lanka, to say that 466 complaints about torture had been submitted to the Commission since January 2015.

Under the PTA, statements made by a suspect to an officer not below the rank of Assistant Superintendent of Police, may be admissible in court as “evidence” against the suspect. And this is often abused, Goonetilleke points out, as in the case of journalist J.S. Tissainayagam who was sentenced to 20 RI under the PTA solely on the basis of an allegedly faked confession.

Anton Marcus, Joint Secretary of the Free Trade Zone and General Services Union, told this writer that workers are in favor of GSP Plus. But sadly, they have not benefitted from the concessions as the employers have not passed on the benefits to them. While the employers have made billions of dollars by easily accessing the EU market, workers’ wages have been kept low and the number of workers has also been brought down, directly affecting thousands of rural families, he charged.

Marcus said that the employers have broken the International Labor Organization’s conventions such as the workers’ right to form associations and their right to bargain for wages. “Leaders who try to organize the workers are sacked,” he charged. When the US had a quota system for imports from Sri Lanka, the Lankan apparel sector had 500,000 workers. But when the quota system was abolished, the employers got rid of 100,000 workers.

“Workers are sacked in a clever manner. By denying them transport from their villages to their work places, or cutting off their breakfast, they are forced to drop out,” Marcus pointed out. The big employers also pool their resources to form ‘One Stop Shops’ doing away with the services of many ancillary units, thus denying business to small entrepreneurs and wages to a larger number of people.

However, when the employers want to fulfill their overseas orders, the employers will make the workers labor under harsh conditions. “At present they are made to work without ensuring that social distancing is maintained, thus exposing the workers to the coronavirus,” Marcus said.

While government says only 50% of the employees should come for work, the employers make 100% come to the workshop to fulfill orders, he added.

According to Marcus, the apparel sector now has 74,000 vacancies. “This is partly because girls are not as eager to work in the garment factories as before, due to the low wages and lack of adequate facilities. They would rather go to the Middle East.”

At one point, the labor shortage was so high that the employers and the government were thinking of getting labor down from Bangladesh and India, he recalled.

Marcus justified the EU’s call for the abolition of the PTA because it could be used against opponents of the regime, protesters and trade union leaders.

The trade unionist also pointed out that the big employers are not really worried about EU’s withdrawing GSP Plus because they have factories in other countries like Bangladesh, Myanmar and Ethiopia, where conditions might be more conducive for making profits.