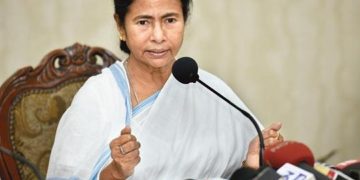 Kolkata, February 22 (Hindustan Times): Those attacking and intimidating Kashmiris in West Bengal in the aftermath of the Pulwama terror attack will not be spared, chief minister Mamata Banerjee has said.

“A Kashmiri shawl vendor was heckled. A Kashmiri doctor practising for years here was intimidated. How dare they? What audacity! How dare they label people hailing from a particular state as pro-Pakistan?” remarked a visibly angry chief minister while addressing an event to celebrate International Mother’s Language Day in Kolkata on Thursday.

“I had to speak up because there are people plotting riots. I do not hate them but I have a fire burning inside me. Those who are spreading hatred in Bengal will not be spared. People who are trying to decide on other people’s language, culture and food preferences must have to be resisted,” she said.

Her remarks came in the aftermath of a video showing an assault on a Kashmiri shawl vendor in Nadia district went viral, following which former Jammu and Kashmir chief minister and National Conference leader Omar Abdullah contacted her.

“Having seen the video doing the rounds on social media of a young Kashmiri man being beaten up in Kolkata I’ve been in touch with @derekobrienmp and @MamataOfficial regarding the matter. The culprits have been identified & strongest possible action has been assured,’’ Abdullah tweeted on Wednesday.

“We must pledge not to degrade our humane values by pointing fingers at fellow citizens belonging to a particular religion or hailing from a particular state,” the statement read. “We seek an end to the politics of dividing people that has spread to different states.”

Over the past few days in Bengal, an LIC agent was suspended in Durgapur and a teacher was sacked by a private school in Kolkata after their social media posts on the Pulwama incident triggered controversy.

There were also a few incidents of groups of people encircling residences of some who questioned government policies on Kashmir.