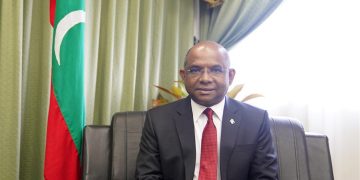 The new government’s foreign policy is to strengthen relations with all countries who respect the Maldives and its people, and the new administration under President Ibrahim Mohamed Solih aims to establish an international system where rules of law and international best practices are respected, said the foreign minister.

“The Maldives is a very important country and an ocean state in the Indian Ocean. We have been a friend to all countries in the region as well as outside the region. And we want to continue that policy,” Shahid said.

Speaking on the Maldives-China ties, Shahid said during his political career, he has seen the relationship between China and the Maldives grow increasingly strong, and he hoped this would continue.

Shahid said that he attended the opening ceremony of the Maldives’ Embassy in Beijing during his term as Foreign Minister back in 2008.

He said even back then, Maldives students who were studying in Chinese universities maintained close relations with the Chinese people.

“During that time, China had experienced a devastating earthquake (in Sichuan Province). The Maldivian student body in a Chinese University had initiated a blood donor program where students donated blood to the victims of the earthquake,” Shahid said.

“Training our young generation in Chinese institutions is important. Because of the technology and economic miracle that we see in China. I think China is a place where Maldives can greatly benefit,” he added.

Shahid said moving forward, the new government under President Solih will continue with the projects initiated in the Maldives under the China-proposed Belt and Road Initiative.

He said the Maldives was grateful to China for being a generous friend and looked forward to greater opportunities between the two countries.