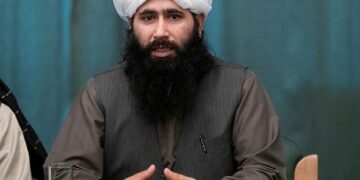 “We don’t have any agenda beyond Afghanistan”: the Taliban

“We don’t have any agenda beyond Afghanistan”: the Taliban Dhaka, August 16: Prothom Alo recently took an exclusive interview of Dr. Mohammad Naeem Wardak, a spokesman for the Taliban political office at Doha, capital of Qatar. Naeem was born in Wardak province, Afghanistan and obtained his PhD degree at the Islamic University, Pakistan. He spoke toTamim Raihan on the future of Afghanistan under Taliban rule.

Q: A new political era has been ushered in Afghanistan with the pulling out of US troops. What is the biggest challenge ahead for Taliban leadership now?

Corrupt and failed administration of Afghanistan is the biggest challenge ahead of us after the US forces leave the country. Reconstruction of what occupation forces and their lackeys had damaged is also a big challenge

We are sons of Afghan soil. We have been fighting for the liberation of our country and to free our land of occupation forces. After we completely free our country, the next goal is to stabilise and improve the situation in Afghanistan. We want to unite the Afghan nation. We want to minimise internal conflict through dialogue among different groups. We are holding talks with various groups in Afghanistan. We want to get united under the umbrella of independent Islamic leadership. Our doors are open to all. We want to create different opportunities for the betterment of the people of the country.

Q: It is a fact that there is a sense of fear among people regarding the Taliban regime. What is your comment on allegations against the Taliban regime such as cruel treatment of opponents, deprivation of rights of people of other religions, imposing restrictions on people in the name of Islam and keeping the women inside their houses?

Afghan people from other religions are also the sons of this soil. They will enjoy their rights and freedom fully and no one will be deprived of their rights. We want to assure all not to worry about these matters and not fall for fictitious propaganda that is being spread in various ways.

Q; So what is going to be the stance of the Taliban on freedom and education of women?

Our stance on women education is as clear as always. We believe in the rights Islam has given to women. Islamic sharia permits education, work and ownership for women. Moreover, Afghan tradition and culture of women are not against Islam.

Q: What is the Taliban’s view in protecting art, culture and heritage in Afghanistan?

We would safeguard Afghanistan’s own culture, tradition and art in light of Islamic sharia. We would thwart the anti-Islamic and anti-Afghan cultures forcibly imposed on the people of Afghanistan under the aegis of the occupation forces. Afghanistan is a country with its own rich history, culture and vast art and tradition. We want to go back to those roots which are left behind by our ancestors and which are the cornerstone of our civilization.

Q: Has there been any change in the ideals and thinking of Taliban leadership in comparison with that of the leadership of two decades ago?

Look, principles and ideals never change. But there might be a change of approach by the zeitgeist of time on basis of changing experience. This is the rule of nature and life. So there might be some changes on account of a changed situation and these are inevitable due to the call of the time.

Q: Let’s move on to regional politics. What are you thinking about relationships with other South Asian nations?

Maintaining good relations with neighbours is of utmost importance. The future of the region depends on the mutual relations among the countries. We have to march together if we want to keep pace with the time and want to find ourselves in a position of dignity in the international arena. We already are on good terms with neighbours and we are in constant contact. We want to strengthen the bond in the coming days.

Q: There have been reports that you are holding discussions with India, while you have boundaries with Pakistan. How have your policies on these two countries changed?

I’ve already said that we want to maintain good relations with neighbours. Not only at the regional level, but we also want to follow this practice at the international level too. We never want our relationship with any given country to be based on the interests of any third country. We also don’t want that our relations with any country become harmful to them. We rather want to work as a bridge in terms of improving relations between countries at the regional level be it in politics, business or culture.

Q: What are you thinking about relations with Bangladesh?

Bangladesh is a Muslim majority country. Bangladesh is moving forward in regional economy. Both countries have historical and cultural ties based on Islamic solidarity. We are interested in maintaining brotherly diplomatic and economic ties with Bangladesh.

Q: Is there any organisation in Bangladesh that is imbued with Taliban principles or do you have any activities in Bangladesh? What do you think?

Look, our stance is very clear in this regard. We have no intention to meddle with anyone else’s affairs. We would not allow anyone to use Afghan land in destabilising other countries. At the same time, we would not put up with the interference of outsiders in our internal affairs.

Q: Some youth from Bangladesh went to Afghanistan in the 80’s and 90’s to join the jihad. Do you have any information or statistics on them? Are there still any Bangladeshi mujahids in Afghanistan? If so, what is your plan for them?

Muslim youth from various countries joined the Afghan Muslim’s war against the Soviet Union. Some remained in Afghanistan while some returned to their respective countries. Afghanistan was ravaged by internal conflict after the fall of Soviet Union and corruption was rampant. Then came the Islamic rule and the whole of Afghanistan got united and Afghans were freed from corrupt elements. Youth from different countries were in Afghanistan at that time. But they had left for their own countries once US forces occupied Afghanistan. No one from outside of Afghanistan is with the Taliban right now.

Q: Can you elaborate further if any party or organisation from Bangladesh has any relations with the Taliban? Some Bangladeshi organisations in the past claimed to have a connection with Afghanistan.

No. Taliban has no connection with any party or organisation of Bangladesh.

Q: What are your thoughts on establishing Islamic rule in other countries?

Look, we don’t have any agenda beyond Afghanistan.

Q: What is your stance on Al-Qaeda or Islamic State?

I’ve already told you that we have no activities or followers beyond Afghanistan. I want to make it clear again that we would not allow anyone to use Afghanistan territory in destabilising or jeopardizing the safety of other countries. We would not also allow any activities which can possibly threaten the security of our country.

Q: Afghanistan’s strategic position is very important geopolitically. It is even more important if you keep China in mind. How are your relations with China?

China is our neighbouring country. China is a big power regionally and internationally in terms of politics and business. We have contact with them and our relationship is normal.

Q: We can see that Arab and Muslim countries have a disparate stance on the Taliban. Some of them are worried while some are observing the situation. What is your policy regarding your relations with Muslim world?

Q: Many countries made investments in Afghanistan following the fall of Taliban rule and some others were interested too. What would be your policy in this regard?

We are looking forward to encouraging trade and investment in Afghanistan. Opportunities would be created in abundance for investment and business under the umbrella of Islamic rule based on principles, In Shaa Allah.

Thank you and the readers of Bangladesh.