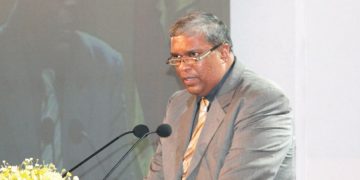 Veteran columnist C.A.Chandraprema appointed as Lankan envoy at the UN in Geneva

Veteran columnist C.A.Chandraprema appointed as Lankan envoy at the UN in Geneva

Colombo, January 18 (newsin.asia): Veteran Sunday Island columnist,  C.A.Chandraprema, has been appointed as Sri Lanka’s Permanent Representative at the United Nations in Geneva, within which is located the UN Human Rights Council (UNHRC).

At the UNHRC, Chandraprema will be expected to take up the cudgels on behalf of the government of Sri Lanka against Sri Lanka baiters from Western Europe and the Tamil Diaspora.

Chandraprema can be counted on to deliver the goods as he has been writing on the war, human rights and other related subjects with authority for years from a Lankan nationalist perspective.

As a columnist, Chandraprema has a reputation for writing data-based, well-argued and neatly woven articles on contemporary subjects. And he has always had a point of view to project, which is robustly argued with verifiable facts.

Chandraprema’s task in Geneva will be to stoutly defend the Gotabaya Rajapaksa government’s stand on the United Nations Human Rights Council’s resolutions against Sri Lanka. The differences are over the accountability mechanisms to be set up to address allegations of war crimes against the Sri Lankan military.

The Rajapaksa government’s case is that there was no willful targeting  of civilians and that strong military action was needed to break the back of the world’s most ruthless terrorist group, the LTTE. Furthermore, Chandraprema would point out that some of the accountability mechanisms suggested by the UNHRC resolutions cannot be put in place because the Sri Lankan constitution and law would not allow them. For example, there could be no foreign judges or lawyers in a Sri Lankan judicial mechanism. At any rate, the Sri Lankan government has decided that none of its soldiers who are considered war heroes by the majority of the population would be made to face any foreign or international court.

Chandraprema also believes, like the Rajapaksa government, that much of the information on which Western narratives of the Lankan ethnic conflict and the war, is selective if not based on outright falsehood. These misconceptions have to be corrected during the February-March 43 rd. session of the UNHRC.

While releasing his book “Gota’s War” published in 2012, Chandraprema said: “A study of the ICRC’s compendium on customary humanitarian law, which is quoted most often in relation to the Sri Lankan case, will yield some surprises. Large chunks of the compendium tend to be ignored by those who talk of war crimes in Sri Lanka. Only carefully selected parts of it are applied in a manner that distorts both the letter and the spirit of the customary humanitarian law compiled in the ICRC study.”

During the coming session of the UNHRC, Chandraprema will be expected to lobby for the amendments which Colombo would want made in the existing resolution. In this endeavour he is assured of the help of countries which are amenable to persuasion by Lanka’s firm friends, Russia and China. The Russian Foreign Minister Sergey Lavrov and the Chinese Foreign Minister Wang Yi, have pledged support to Sri Lanka’s bid to maintain its sovereignty in their meetings with the Lankan President Gotabaya Rajapaksa on January 14.  Pakistan is another country, Sri Lanka can count on. India too could help as New Delhi has extended its hand of friendship to the Gotabaya government to keep up its influence in the region.

But there are formidable challenges too. Germany has taken up the cudgels against Sri Lanka in the absence of the US from the UNHRC. Then, of course, there is the Tamil Diaspora, which is quite formidable with support from many European countries which have significant numbers of Tamil refugees or economic immigrants.