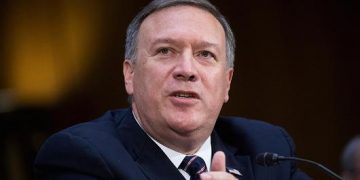 Colombo, June 19 (newsin.asia): The US Secretary of State, Mike Pompeo, who was to have visited Sri Lanka on June 27, has cancelled his visit citing a tight international travel schedule.

Announcing the cancellation of the visit the US Embassy said on Wednesday: “Due to unavoidable scheduling conflicts during his upcoming visit to the Indo-Pacific region that includes accompanying President Donald J. Trump to the G20 Summit in Japan, U.S. Secretary of State Michael R. Pompeo is unable to visit Sri Lanka as previously announced.”

“Secretary Pompeo regrets that he is no longer able to visit Colombo at this time.  He hopes to travel to Sri Lanka at a later date to underscore our strong partnership with Sri Lanka, which is rooted in a commitment to democracy, economic growth and a free, open Indo-Pacific region. The United States remains committed to these objectives and looks forward to building on our longstanding partnership.”

The sudden cancellation of the visit to Sri Lanka of US Secretary of State Mike Pompeo gives the island nation reprieve from the controversial Status of Forces Agreement (SOFA) at least for the time being.

Pompeo was to be in Sri Lanka on June 27 ostensibly to discuss with Prime Minister Ranil Wickremesinghe, issues relating to counter terrorism, freedom of navigation in the Indian Ocean and the Indo-Pacific region, and the use to which the US$ 480 million American Millennium Challenge Corporation Fund should be put.

No SOFA For Now

But the primary aim of Pompeo’s visit was not this, but to thrash out an agreement over some sensitive clauses in the controversial US-proposed SOFA.

SOFA had run into rough political weather in Sri Lanka with President Maithripala Sirisena expressing opposition to it and even directing  Foreign Minister Tilak Marapana  to tell American officials in Washington that Colombo has serious reservations  about some clauses which will compromise Sri Lanka’s sovereignty.

Prime Minister Ranil Wickremesinghe, who is not opposed to SOFA per se, was also of the view that some of the clauses were unacceptable.

But US officials said that these issues could be thrashed out in further “technical” talks..

US Embassy spokesperson Nancy Van Horn has been quoted as saying: “We have proposed amending this agreement to include some additional privileges, such as the mutual recognition of professional licences, how US military personnel, US Department of Defence (DOD) military persons and civilians can visit Sri Lanka, fees for support services rendered, and regulations for hiring foreign and local contractors.” She added that the updates will streamline processes already in place and facilitate collaboration with the Sri Lankan military on counter-terrorism practices, maritime security, and other issues of common concern.”

Pompeo would have discussed these issues in Colombo at the Prime Ministerial level. But he would not have a chance to meet and convince the principal opponent, President Sirisena, as the latter would be away from the country on a tour of Cambodia and Laos. A meeting with Sirisena would have been crucial as he is also the Defense Minister of the country.

The President considers signing of any such agreement in an election year as politically suicidal. Sirisena had directed that no such agreement should be signed with the US and told Foreign Minister Tilak Marapana, who was in Washington holding talks with officials there, to make it clear that SOFA is unacceptable.

According to a media report, Marapana told US officials that Sri Lanka will find it difficult to grant immunity from criminal jurisdiction to US forces and that it will be difficult to implement the 1995 SOFA, agreed through an exchange of notes, due to the enforcement of the Diplomatic Privileges Act No. 9 of 1996.

Writing in the State-owned Sunday Observer, Sugeeswara Senadhira said that a  SOFA “may include many provisions, but the most common issue pertains as to which country may exercise criminal jurisdiction over US personnel. Other provisions in a SOFA include, the wearing of uniforms, taxes and fees, carrying of weapons, use of radio frequencies, licenses, and customs regulations.”

According to the ultra-leftist and nationalist Janatha Vimukthi Peramuna (JVP), SOFA would grant US military personnel, US military contractors and US military suppliers, the same perks and privileges granted to technical and administrative officers of the US Embassy.

Recently, Defense Secretary Gen.(Rtd). Shantha Kottegoda told the Pathikada program on Sirasa TV, that SOFA should not be signed. He also said that no foreign troops are needed to protect Sri Lanka referring to provisions in SOFA in regard to the deployment of US defense personnel in the island.

Mahinda Amaraweera, the General Secretary of the United Peoples’ Freedom Alliance (UPFA) of which Sirisena’s Sri Lanka Freedom Party (SLFP) is a part, told the media that SOFA is detrimental to Sri Lanka as it would allow the US military “to occupy Sri Lanka with immunity from Sri Lankan laws.”

The Leader of the Opposition and former President Mahinda Rajapaksa, who is the quintessential nationalist, is silent on the issue. But his left wing and ultra-nationalist allies, Wimal Weerawansa and Dinesh Gunawardena, have openly opposed SOFA describing it as a sellout.

According to diplomatic sources, while in Sri Lanka, Pompeo had plans to visit Trincomalee which the US appears to have earmarked for the construction of a logistics base for its armed forces under SOFA.

The US is also reportedly keen on developing over 18, 000 acres of land purchased from private parties in the hinterland.

This plan has also attracted flak from Sri Lankan nationalists.